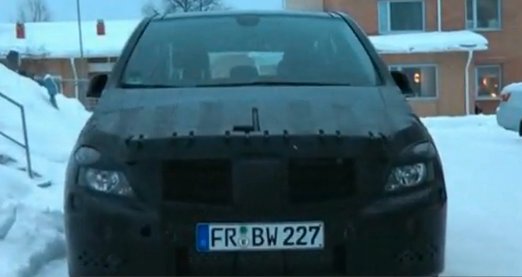 The three-pointed star brand has revealed only the technical details for its Mercedes B-Klasse for the moment, a model will also receive a dedicated eco version of its actual engine, in the near future. The car will also be fitted with four-wheel drive and a range of alternatively powered engines that will be installed on the future models.

Changes have also been made at the car’s chassis which means that it no longer has sandwich architecture, this allowing the engineers to lower the B-Klasse center of gravity by up to 30 mm. The modification provides a much sportier feel, without losing the comfort that Mercedes owners are used to.

A new “energy storing space” has been engineered into the space between the floor and the under tray, which can be used to store batteries, natural gas tanks and fuel cells. This new feature will be installed on the future hydrogen and hybrid variants, which are scheduled for 2013/2014.

The new B-Klasse is equipped with a multi-link rear suspension designed to accommodate the four-wheel drive, 4matic models would be available on more powerful models also on AMG models.

Mercedes is considering to benefit from its partnership with Renault in order to develop a range of three cylinder engines, to cover the most efficient range possible. The new powerplant is a direct injection 1.6 litre turbo, and will be available in 2 versions that will produce 123 hp or 154 hp. Special attention has been given to the torque that the engine will have at the lowest revs, so peak shove arrives at a remarcably low 1,250 rpm.

The unveiling of the new B-Klasse will take place at the Frankfurt Auto Show in September, with European sales to start this autumn.