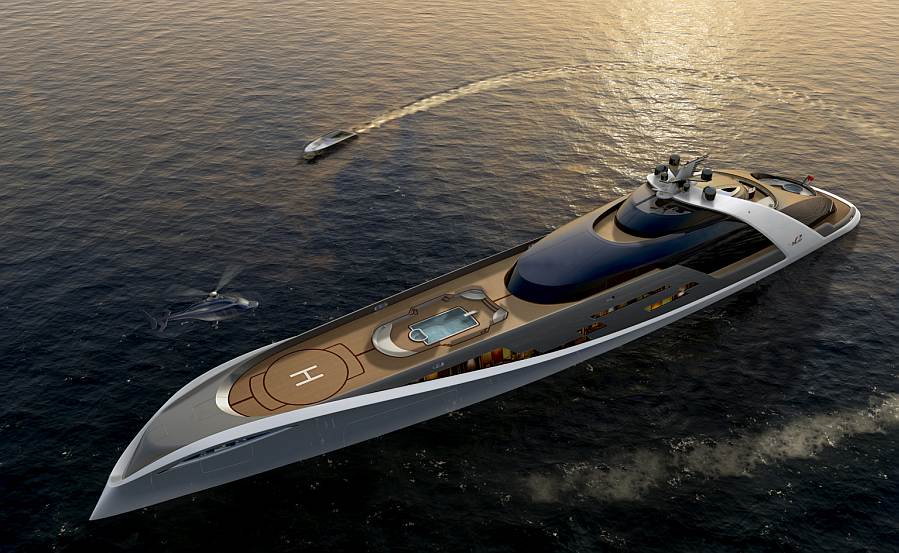 The team at Drive, a company that is renowned in Marine and Automotive design, have been working on a concept that reunites the customary things for the rich and the famous: luxury cars and superyachts. Therefore, Drive designers have developed the 125m 7Cs superyacht that borrows ideas from the automotive industry.

Just as expected, the luxurious cruiser will come with the usual features that can be found on other yachts, but additional features will be included as well. A sunken pool with retractable cover and a helicopter storage are destined to maximize deck space, Bornrich reported. A jacuzzi at the rear and an atrium space with a double curved staircase inside have also been included by the Drive designers.

Drive has utilized a unique hull with the reverse bow and has tried to approximate a cruising speed which would be in the region of 20 + knots. Its range at cruising speed would be of about 5500 nautical miles.

When it comes to interior accommodation, Drive originally planned to have superior space for the owner and his guests. The designers wanted the interior to be as spacious as possible, so it resulted in a smaller number of rooms. The interior would have provision for about 12 guests (possibly up to 14), with almost double that number for the yacht’s crew.

The team works on taking the project further, is currently finalizing the interior accommodation space and hopes to release visuals of the internal space soon. Drive have announced that they are at the point of partnering with a naval architect to take it to production, so we will have to wait a little for some info on the pricing of such a watercraft.