3 BMW Shows Off Individual Range for the 2016 7 Series

Mihnea Radu
Most people say that Nardo Gray is the coolest color Audi sells. It's usually restricted to its high-performance cars, of which there are more this year than at any other date in the company's history. But what if you liked the color and not the brand?
6 photos

We have to agree that the Audi S4 is pretty old and strange-looking. Meanwhile, the BMW 3 Series is pretty much the best-looking compact executive sedan in recent memory, particularly with the M look packages.

Enter the M340i that's been custom-painted in Nardo Gray. This has to be a custom order, and it doesn't reside where you think (the Middle East), but in Britain. BMW specialist and YouTuber Joe Achilles, who you may have seen in Carwow's drag race videos, is the man who discovered this unique gem.

We've also got a Verde Ermes paint job for the M340i, which you wagon guys are going to enjoy even more. To get the color on your BMW, the dealer says you'd have to pay around GBP 4,500 extra. In addition, the wait is far longer than with a normal order. You could be looking at a six-month wait.

Besides the Audi paint and the M Performance body kit, this car also seems to have some options that boost the price by about a third more than stock, like side skirts, a carbon deck lid spoiler, carbon mirrors, and a mechanical rear LSD.

The owner of the M340i sedan used to have the M140i, so he's got pretty much the same kind of engine, but with a bit of extra power. But where the hot hatch didn't come with xDrive in Britain, this one has the AWD system, which means it's going to feel slightly quicker and safer in the wet. In any case, tell us what you think of a BMW that's painted in an Audi or Lamborghini color. 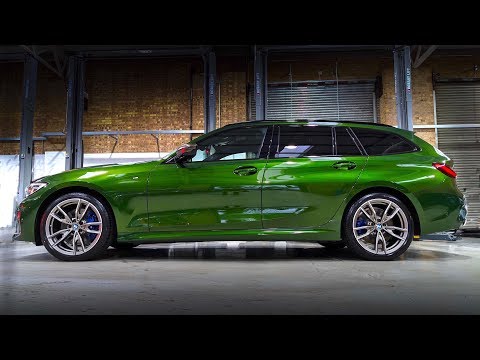