2 Aston Martin Will Build a Crossover, Use Mercedes-AMG Engines

5 Cadillac’s Idea of Trolling BMW, Mercedes and Audi for Geneva Motor Show Is Funny
Car video reviews:
Up Next

Fiat 500 Celebrates Six Decades Since a Legend Was Born

The G500 4x4 Squared literally looks like a lemon, a square one. But according to the review Chris Harris did for Top Gear, it's better in most regards than the G63 AMG model.
5 photos

Many incremental steps were taken, fixing some of the things that were wrong with the G63 and G65. For example, Harris noted that the traction control doesn't end the party every time you go near the gas. You kind of expect that when you compare 400-ish horsepower to a V12, but this could just be a case of the right engine in the right car tank.

The 4.0L used here is effectively a de-tuned version of the engine in the C63. There's no shame in having that, particularly since plenty of tuners have upped the ante in the horsepower department. Stock, it's about as fast as a Golf GTI. Do you really need more? We'd argue not.

To make the 4x4 Squared so tall, Mercedes fitted its famous portal axles, turning a great off-roader into a brilliant one. Usually, trail rated Jeeps are noisy and uncomfortable on the road, but the G500 is actually better than the regular model.

That extra suspension travel offers a genuinely great ride, in contrast with the lowered G63. Sure, it's also been fitted with wider tires and fender flares. But as long as you stay away from Central London, it won't feel as oversized as people say.

It's amazing that something which looks so outlandish, almost precarious can work as a regular car. But if you came here to watch Chris Harris drift the 4x4, you'll be sorely disappointed. (the image of Lieberman spinning the 6x6 plays in the editor's head as he cries uncontrollably)

The ESP can be switched off, but as soon as you try to do anything, it switches back on. So that's interesting, considering one guy managed to put it on the roof. 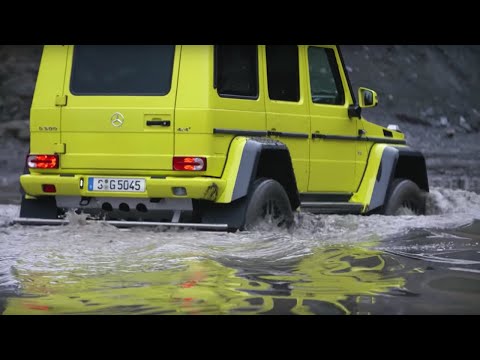