2 Mercedes-Benz Is Positive About the Refugee Situation, Launches Internship Program

5 One Down, One More to Go for Mercedes-Benz at the End of the First Three Quarters of 2015
Coverstory

King of the Hammers Is Underway: Here's How It Started and Where It's Going

Mercedes-Benz Gets Too Excited About “Back to the Future Day,” Messes Up the Date

Home > News > U-turn
Vlad Mitrache
This “Back to the Future Day” is starting to catch up really fast, which only goes to show what a big influence a cult movie can have on the society.
1 photo
The thing is, due to the nature of this anniversary, it can only be celebrated once in the whole history of humanity. You see, Doc and Marty McFly only traveled to one particular date into what was then the future, so it’s October 21, 2015 or nothing.

Mercedes-Benz wanted to cash in on the idea of time travel, futuristic technology, and relate all that to their cars - particularly the F 015 concept. And that’s OK. What isn’t OK is the fact they messed up the date of this once-in-everyone’s-lifetime celebration, buying into a misleading information the Internet has been spreading.

You see, as we’ve said just now, the real Back to the Future date is 10.21.2015, but for some reason the Internet has been photoshopping and re-photoshopping that iconic image with the DeLorean’s display countless times. In the end, the idea that 10.15.2015 was the real date somehow managed to come forward.

Enough so that even Mercedes-Benz bought into it and released their nod at the BTTF anniversary yesterday, on October 15, 2015. Oh, well, it happens to the best of us, I guess.

Still, let’s try not to send that much flack Mercedes-Benz’s way, and focus instead on congratulating them for bothering to mark the occasion. What I wouldn’t encourage, though, is automated dog-walkers. And force-field laser-leashes thingies - that instantly makes you think of an electric-shock collar, something any dog-loving person finds hard to digest.

But enough about dogs, let’s talk cars. Particularly, the Mercedes-Benz F 015 Luxury in Motion Concept - a car that, it has to be said, looks very similar to those in the movie. In the short clip you’re about to see, Mercedes-Benz thanks “Doc” for inspiring its engineers, when, in fact, it should be thanking the movie’s creative artists for inspiring its designers.

Now, if you’re very strict about your Back to the Future things, you might want to wait until October 21 to press the play button below. All you normal people out there, though, feel free to do it anytime. 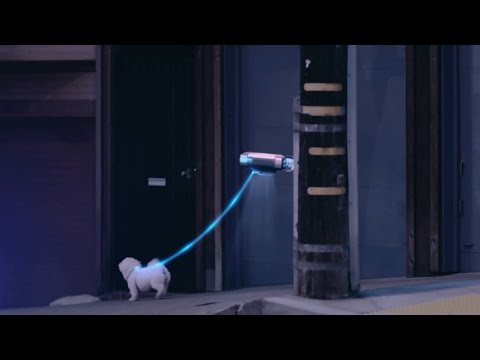