1 Mercedes-Benz Beats Both BMW and Audi in Germany

Alex Oagana
Ten or fifteen years ago, 500+ horsepower and close to four seconds naught to 100 km/h (62 mph) times were only reserved for supercars and/or highly tuned cars.
1 photo
Many things have changed since then in this department, as you can now go in every premium manufacturer's dealership, fork out some cash and drive off in a 550+ horsepower sedan that can shame most 1990s supercars.

Both the Mercedes-Benz E 63 AMG W212 and the BMW M5 F10 are sees as the best cars in their segment depending on who is comparing the two.

The folks from Autocar India decided to pit the two German uber sedans against each other, and considering that India is a former British colony, both models are only available as rear-wheel drive only (4Matic isn't available in LHD countries, ed).

Leaving the slightly-butchered English language and the “Alacantra” seats in the BMW aside, the following review is pretty informing, while the overall comparison conclusion is very much in trend with our own opinion about the two cars as well. 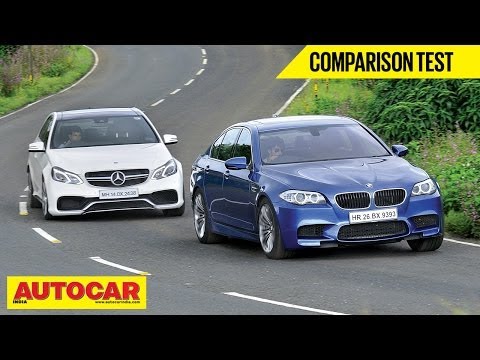