Daniel Patrascu
Come 2023, the Oxia Planum region of Mars will become home to a new Earth-made piece of hardware. It’s called ExoMars, or Rosalind Franklin, after a 20th century English scientist, and like all others sent there before, it will be tasked with hunting for signs of alien life. And it packs some serious hardware to get the job done.
6 photos

The mission is a European affair, and it is scheduled to depart next year on a Proton-M rocket. ExoMars, Europe’s first rover to be sent to the Red Planet, has been delayed several times, but now seems on track for the scheduled launch.

The European Space Agency (ESA) has begun testing the thing’s motoring skills earlier this year, using an exact replica of the rover that will be making the journey to Mars, and now it says it moved to perform the first scientific tests using the same machine, in a simulated Martian environment somewhere in Italy.

And the rover sure packs some serious hardware, clearly destined to leave no chance for Martian life, if any, to go undetected.

Four cameras are on deck to help the thing move along. Two of them, called NavCam and LocCam, are located at the top and at the bottom of the rover’s mast, helping it “see in three dimensions and identify the rocks and slopes ahead.” The other two, PanCam and CLUPI, help the machine “get a whole picture of the site with high-resolution imaging.”

A ground-penetrating radar called WISDOM is also on deck to look at the surveyed areas in a grid fashion, helped by a neutron spectrometer called ADRON and meant for detecting signs of water and hydrated minerals below the surface.

When a site of interest is detected, the rover will use its onboard drill to extract samples. It can dig to a depth of two meters (6.5 feet) beneath the surface, the deepest anyone has managed before.

Once the samples are collected, they’ll be crushed and moved into the onboard laboratory, where sensors and such will look to understand their mineralogy and chemistry. This will be done by means of another suite of instruments called MicrOmega, Raman and MOMA, each tailored to look for a particular thing during the soil sample analysis.

Testing of these instruments has only begun, and will continue over the next few months, while the rover that will actually leave for Mars is getting ready for its trip. 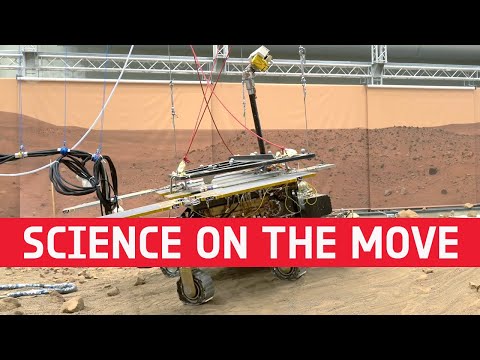