2 City Cancels $33M Order for Hydrogen Buses, Turns Out Electric Ones Are Better

3 L.A. Gets $6 Million to Install One of the Largest EV Fleet Charging Systems in the U.S.

Out of a commendable desire to contribute to the green economic transformation, Canada-based electric bus manufacturer Letenda introduces a new-generation transit bus developed for the harsh Canadian winters. It is electrically powered and not afraid of low temperatures.
6 photos

The Electrip is a 9-meter (30 ft.) long city bus with a design and geometry focused on comfort, visibility, and maneuverability. It is also the first model in the company’s line and the result of six years of development. Letenda’s intermediate bus has a modular structure and is made mainly of aluminum, making this an ultra-lightweight bus, although we have no exact figures to back that up. So far, the manufacturer has been very skimpy when it comes to the vehicle’s specs. We are also being told that the Electrip is a long-range bus but once again, no numbers are being offered.

But here’s what we know about the electric city bus so far: it has a low floor design that maximizes cabin floor space and it can be configured in several ways. Its maximum capacity is 45 people, including 24 seated passengers and up to six wheelchairs.

With the Electrip being designed for cold Canadian winters, the heating system plays an important role, which is why the bus comes with proven thermal insulation, heated surfaces, and radiant floor heating. Letenda boasts 22 2-296 kWh of energy onboard the Electrip, with the bus being powered by Cummins Li-Ion NMC modules. The charging time of the batteries at 150 kW DC is two hours.

Letenda unveiled its Electrip bus over a week ago and it is now available in Quebec, which represents an important step toward the electrification of public transport in the area. According to Francois Bonnardel, Minister of Transport in the Estrie region, 35 percent of all greenhouse gas emissions in Quebec are caused by road transportation alone, which is why the goal is to electrify at least 55 percent of the city's buses by 2030. 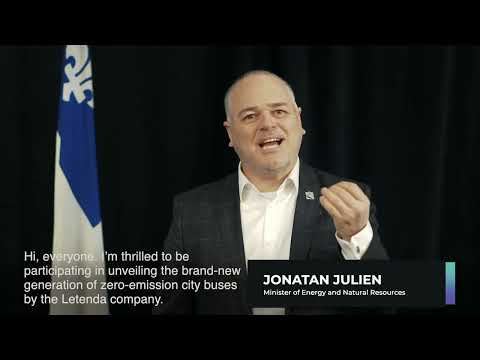