1 Gesture-Controlled Toy Car Is Not Your Average Kickstarter Project

Being a parent is not easy, and many will tell you that it can get expensive. Fortunately, not every toy made in the world must be purchased, because you would end up getting a D.Throne.
13 photos

This creation is a toy car for children, and it is powerful enough to enable an adult to sit on its back while his or her child is in the driver’s seat.

It costs about $3,000, and it comes with a metallic frame, real wood elements, and leather upholstery. While it is six times more expensive than an equivalent toy in the shape of a McLaren F1, the latter will probably break if you climb on it with your kid.

The Koreans at D.Throne build these products in China, but they say that the design of these toys has been made to last the test of time. In other words, they claim these are not mere toys that will break down in a few weeks of use, and that your offspring will be able to enjoy them for longer than any competitor’s product.

Its makers say that it can hold as much as 441 lbs (200 kilograms), which is more than enough for a kid and his dad, for example, and the specifications do not end here.

The D.Throne comes with a full rear suspension, as well as a rear differential that is meant to handle the power coming from the electric motor, New Atlas notes.

Depending on the operating mode and the weight of its occupants, the D.Throne can drive for three to seven hours, which will probably mean many laps around your yard. The maximum range is estimated at 77 kilometers (47 miles), which is more than we would expect from a toy like this.

Clients can order different colors for the frame, the wooden trim, and even for the leather upholstery. Evidently, bespoke options can be ordered, and the crown prince of Dubai received one that had 2,000 Swarovski crystals on it.

The design of this expensive toy reminds us of British automobiles, but its creators made sure not to infringe the intellectual property of any brand. That is why the front grille is rounded-off at its edges, among other details. 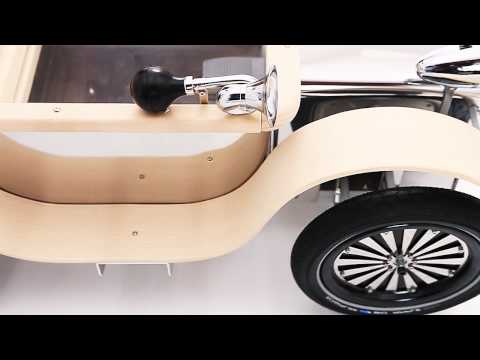