Terminal velocity implies there’s a limit to the speed that can be attained by an object as it falls through the air. It’s secondary school physics, and it’s what proves that Blue Origin’s recent suborbital flight and controlled landing is a success. It showed that Amazon’s boss has just broken a boundary Elon Musk’s SpaceX is still fighting with: reusable space rockets.
1 photo
It's aerodynamics what separates an elephant from a feather when it comes to the speed they reach when falling, and not their weight. And it's also one of the reasons Blue Origin’s prototype reusable rocket is better than the SpaceX Falcon 9. That is, only if the video Amazon’s boss has just posted on his Twitter is real.

The video you can see below was taken at the aerospace developer headquarters in West Texas and shows a historic rocket landing. It’s groundbreaking for the simple fact that space travel is currently expensive, because each launch rocket that sends spacecrafts beyond Earth is then destroyed instead of reused.

With this launch, Blue Origin has just proved it has the technology to land a rocket safely without breaking it to pieces. Here’s what happened, according to the company:

“Our unique ring fin shifted the center of pressure aft to help control reentry and descent; eight large drag brakes deployed and reduced the vehicle’s terminal speed to 387 mph; hydraulically actuated fins steered the vehicle through 119-mph high-altitude crosswinds to a location precisely aligned with and 5,000 feet above the landing pad; then the highly-throttleable BE-3 engine re-ignited to slow the booster as the landing gear deployed and the vehicle descended the last 100 feet at 4.4 mph to touchdown on the pad.”

4.4 mph is about the same speed a regular bike commuter goes around town on a daily basis, especially if it’s a crowded city. Blue Origin has not flown its spacecraft into space (orbital), but into the suborbital area of our planet, which is 62 miles (100.5 km). Blue Origin leaves SpaceX behind
New Shepard - which is the name of the space vehicle Blue Origin just launched - consists of a BE-3 rocket and a crew capsule. Once it reached suborbital heights, the capsule separated and touched down beneath a parachute. What truly makes it a game changer, however, is the fact that the rocket landed gently.

SpaceX may be close to landing on a barge platform, but so far it failed to do so, which makes Blue Origin’s landing a premiere. And when you think that Elon Musk’s space company is the one that won NASA’s contract to send astronauts to the ISS... 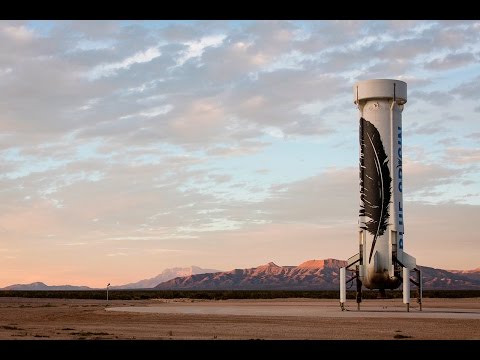