1 Ultra-Fast-Charging Stations with 500 kW Rates in Development, 0-100% in Minutes

2 Lampposts That Double as EV Charging Points - How Brilliantly Simple Is That?

Home > News > Industry
Vlad Mitrache
When he first launched Tesla, Elon Musk knew all too well that to create a demand for electric cars, you need to give people somewhere to charge them when they stray far away from their homes.
8 photos

And since the authorities weren't going to chip in, Tesla had to do things on its own. That's how the Supercharger network came about which is still one of the company's greatest assets compared to its competition. You know, apart from the fact it makes vehicles with better specs.

The most important European carmakers - i.e., the German ones - are just getting ready to roll out their first true EVs, but when they eventually hit the market later this year or during 2019, they'll be faced with the public charging problem. The Old Continent has plenty of charging stations, but their charging rates were designed for much smaller battery packs, which means replenishing a modern pack would take close to forever.

To overcome this situation, a few companies have joined hands to create the non-Tesla equivalent of the Supercharger network. BMW Group, Ford, Daimler (the maker of Mercedes-Benz), and Volkswagen Group created IONITY, a company with the ultimate goal of creating an ultra-fast pan-European charging network that should allow long-distance traveling in EVs.

Things have moved pretty quickly for IONITY, and after announcing its planned locations for the first stations last month (they cover the most important corridors on the continent), it has now unveiled the design of its stations as well as a few possible layouts.

According to the released images, the largest station seems to incorporate a maximum of ten chargers, but given the very high charging rates (of up to 350 kW) a vehicle shouldn't be stationary there for too long, meaning a larger number of cars could be served during an hour.

The target is to reach 400 stations across Europe by 2020, with ten already on the way and 100 planned by the end of this year. Right now, there are no EVs that can make use of IONITY 's rates, but the next crop of models - the Mercedes-Benz EQC, the Porsche Mission E or the Volkswagen I.D. - are expected to come more powerful onboard chargers. Depending on how sales go, we could probably be looking at either expanding the capacity of the 400 stations or building new ones - or both. For the time being, though, we're still looking at zero functional sites, so let's not get ahead of ourselves.

For now, all we can talk about is the design of the chargers, and here how the company describes it: “As if it were floating, the light box sits like a roof over the slender vertical pylon, giving the charging station the appearance of a beacon, an effect, which is particularly striking at night. In keeping with the character of EMobility, the station’s architecture conveys an open, light and warm sense of space. Crisp, simple structures and surfaces, smart interfaces and a mixture of robust, lightweight materials merge together into a seamless ‘charging experience’. In keeping with the IONITY logo, the colors represent the flow of energy during the charging process as depicted by the charge status.” 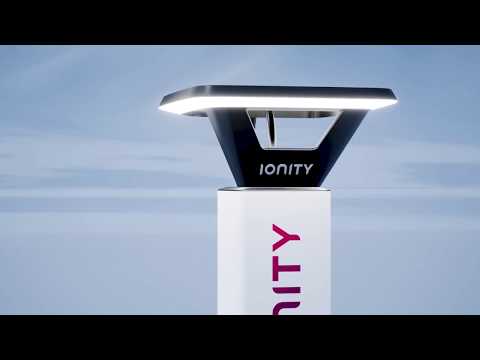