Gabriel Nica
The internet is truly a wonderful place. You can find anything on it, from videos with cats chasing lasers to drag races done in Mexico between 800 HP monsters. What we have here then, is not a cat video, as you probably were expecting.
1 photo
Here we get to see one of the fastest BMW E46 M3s on the planet at work and boy, it sure does run fast as hell. Since the owner claims that his S54 engine is making around 850 HP now (we’re guessing at the wheels too) I’m pretty sure you didn’t expect it would go up against some stock Corvettes, right?

Oh no, he is running up against an 88 mm turbocharged Vette that is supposed to put down around 818 HP with just 10 lbs of boost. The thing is, the owner claims that most of the other parts, like the transmission and cams and everything, are still stock. That is impressive all on its own.

However, we can’t help but wonder what madness drove him to have that massive fire spitting pipe run up right next to the windshield. I don’t know about you, but I’d be distracted every time I changed gears!

The white Corvette is even more hardcore, with a supercharged LS3 engine combined with a bunch of ZR1 parts, including a new clutch. According to its owner, it makes ‘800-ish’ horsepower. Judging by what went down on the highway later on, we’re guessing some of these guys weren’t exactly honest about their cars. Either way, it’s a hell of an interesting video to watch. 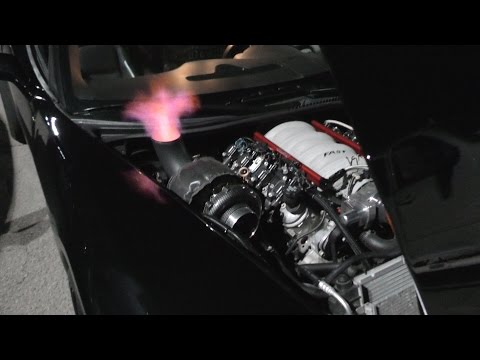