Airstream Reveals Basecamp 20, Might Be Worth Going Atlas With It

The UK doesn’t really have a hot / rat rod culture, but the few people who do specialize in this type of custom work stand out in terms of unbridled creativity, resourcefulness and skill. Paul Bacon is one such example.
13 photos

As part of our Custom Builds Month, we’ve already discussed one of Bacon’s most famous creations: the steampunk hot rod known as Automatron, which he built from scratch over the course of four years and a half. It is not just his most famous project, but also the most challenging and extended, which saw him work on a trial-and-error basis, adapting as he went along.

It turns out, Bacon can do faster builds as well. They’re not legit rod work, but they’re still custom projects – like this rat rod van that he built from a London cab. And it only took him 7 days to get the job done.

While Automatron catches the eye for the intricate work and the insane details that seem to stand out more the more you look at it, this van stands out for being the most practical car Bacon has ever built. It was completed in 2017 and started off as a regular London black cab, which Bacon bought for around £450 ($566).

As he explains in the video at the bottom of the page, an interview with Barcroft Cars of that same year, he only did this project because he needed a van to advertise his custom shop and he only had 7 days off. So he set out to cut the lower part of the body and rebuild it into something that would ultimately end up looking like a horror movie van. For that, he used timber, fiberglass and expanding foam, which he molded by hand, and layers upon layers of paint and lacquer to create this fake rusty painjob.

The suspension isn’t lowered on this build, even though it looks like it. To stick with the rat rod theme, Bacon lowered the arches of the wheels. He also added a cyclone-style cooler on the side of his front window for that same purpose.

The engine is a 2.7 Nissan diesel that’s standard in London cabs, and the seats are from a 1974 Rolls-Royce Silver Shadow. Top speed is of about 65 mph (104 kph), Bacon says.

However, the biggest merit of this rat rod van, aside from the outstanding looks, is the fact that it’s reliable.

“I use the van every day as my own personal transport so you know it’s pretty good,” the creator says. “It starts every morning, carries a lot of junk in the back – that’s all you need from a van really. This is the most usable vehicle I have built. It doesn’t have a sparkling performance, but it has bullet-proof reliability.” 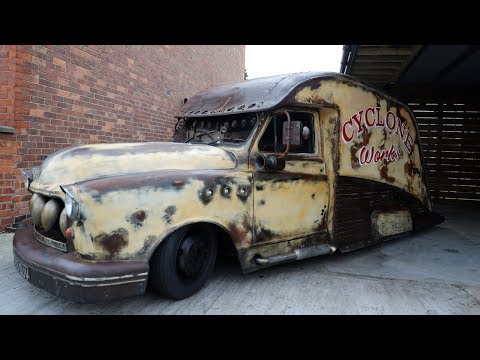