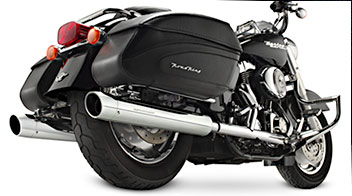 When most aftermarket exhaust manufacturers are dedicated to the sportbike range, SuperTrapp Industries comes with not one, not two, but ten new slip-on options for the 20099 Harley-Davidson Tri Glide cruiser.

The company, however, covers the whole range of motorcycles, including V-Twin, Metric, Sport and Dirt.

The ten exhaust slip-on options launched by SuperTrapp are listed below:

The Internal Disc Series provide a 10-15% horsepower gain. The chrome muffler includes heatshields, chrome end caps and discs. To increase or decrease horsepower and tone, the rider only has to add or remove 3-inch discs to the exhaust.

Finally, quieter than stock, the fully chromed plated FatShots Slip-Ons have a 3.5-inch diameter, while providing a 15% horsepower gain and a 12% torque gain over stock. The rider can customize the power by adding or removing 4-inch discs. These Slip-Ons come complete with twenty-four 4-inch discs and all the necessary hardware and mounting instructions.