Hamilton to Be Banned from Swiss Roads? 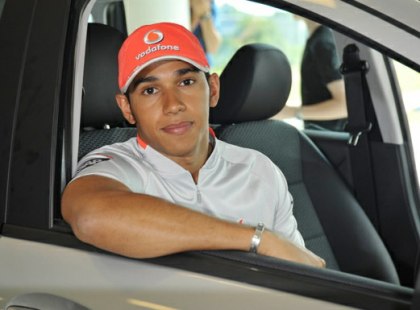 Lewis Hamilton's multiple road offenses in the last couple of years could get his Swiss driving license revoked in the near future. According to several media in the country, who have cited a road-crash victim's foundation and a politician, it seems that there are some voices in Switzerland who are asking for Hamilton to be banned on their roads.

All this scandal was triggered by an interview gave by Hamilton's partner Nicole Scherzinger, who told Maxim magazine that her hubby remains wild at the wheel of his car despite the incident that occurred in March this year (when Ham was fined for doing a burnout and a fishtail with his car on a boulevard in Melbourne).

“He's like, 'Babe, you're driving with your knees! I'm doing my makeup, changing the radio...” said the Pussycat Dolls lead singer.

In addition, Scherzinger joked when asked about the speed Hamilton is driving with sometimes, saying that if she'd disclose that information the 2008 Formula One champion would be banned in Switzerland (where he currently resides).

“I think they (Hamilton and Scherzinger) show an absolute lack of character. With these statements, he is a bad role model for all the young people who idolize him,” said Segmuller.