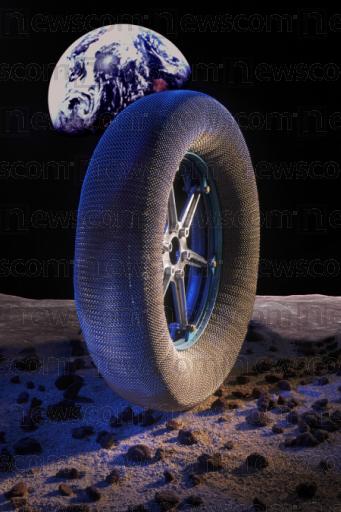 In light of the upcoming return of the human race to the Moon, the National Aeronautics and Space Administration (NASA) has partnered, among others, with Goodyear for the development of an airless tire to be used on extra-terrestrial surfaces.

Called the "Spring Tire," it features 800 load bearing springs, designed to carry much heavier vehicles over much greater distances than the wire mesh tire previously used on the Apollo Lunar Roving Vehicle (LRV).

"With the combined requirements of increased load and life, we needed to make a fundamental change to the original moon tire," Vivake Asnani, NASA principal investigator said in a release. "What the Goodyear-NASA team developed is an innovative, yet simple network of interwoven springs that does the job. The tire design seems almost obvious in retrospect, as most good inventions do."

The new tire is very different than the ones seen on Earth roads. Due to the fact that regular rubber, pneumatic (air-filled) tires are as useful on the Moon as "cash for clunkers" is without government money, its creators had to think up new ways of designing the tire.

With that in mind, the new tire was created to withstand the sharp temperature differences. According to Asnani, the Spring Tire will not blow out if it is punctured. Should a puncture occur, it would affect only one or a few of the 800 load bearing springs.

"Along with having this ultra-redundant characteristic, the tire has a combination of overall stiffness yet flexibility that allows off-road vehicles to travel fast over rough terrain with relatively little motion being transferred to the vehicle," Asnani said.

Fun and interesting, you might say, but not as fun and interesting as what is to come. Presented at NASA's recent "Day on the Hill" exhibit at the Rayburn House Office Building in Washington, DC, the tire turned a lot of heads...

Heads which have the decision-making-skills required to make the technology available for Earth roaming vehicles.

"Virtually everyone I spoke with was blown away by the idea that this technology may one day be used, not only for extraterrestrial vehicles, but also, perhaps, for vehicles here on Earth," Asnani concluded.