2 Thousands of Brand-New Mercedes-Benz Cars Sit on an Unused Airfield, Here's Why

Since the semiconductor crisis started back in 2020, carmakers across the world have been working on multiple fronts in an attempt to reduce the disruptions in their daily operations.
6 photos

More often than not, they turned to temporary manufacturing halts, hoping the chip inventory would be replenished as fast as possible in order to minimize the impact on their production targets.

When this didn’t work, most carmakers turned to plan B and started building incomplete vehicles that were then moved to parking lots, where they were left to wait for the missing chips.

Unfortunately, the same approach continues to be used today at a time when the chip shortage was supposed to be over already. At least, this is what most industry analysts predicted at this time last year, as many expected the semiconductor crisis to be resolved following the investments in capacity.

If it’s not clear already, the constrained inventory continues to be a problem, and images of GM’s parking lot in Kokomo are nothing more than living proof in this regard. Local media claims there are around 3,000 trucks packed in there and waiting for the missing chips, though right now, nobody knows for sure when they could be finished and shipped to dealers.

Parking lots packed with incomplete vehicles are nothing new, and unfortunately, they have been more common in the last couple of years.

And according to General Motors CEO Mary Barra, there’s a chance they would stick around for a little longer, as the company doesn’t expect the chip shortage to be resolved earlier than 2023. Barra says the current global chip inventory is slowly getting better, but on the other hand, there are signs that the crisis would continue for at least one more year and even “a little beyond.”

Similar projections have been released by other carmakers out there, so right now, the industry should better not hold its breath for pre-2020 production levels. 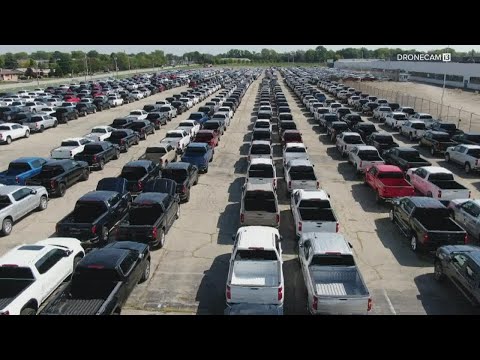