3 The GPS Tracker with SMS Messages
Car video reviews:
Up Next 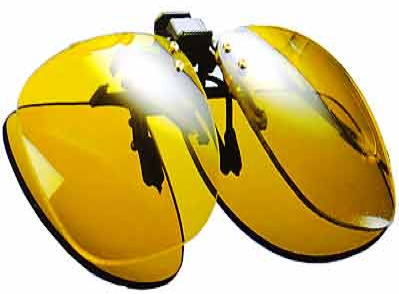 Driving at night is for most drivers a pleasant activity, especially in crowded cities where traffic jams during daytime occur on a regular basis. But this doesn't necessarily mean that it is also recommended to all drivers because the reduced visible area combined with the other headlights increase the risk of accidents. Such problems could be easily solved with the new Night Vision Clip-on Glasses, a tiny device that intends to prevent all the aforementioned dangers.

The glasses are not as complex as other car gadgets but could prove to be more efficient than many of them. For instance, they don't need a power source in order to work properly, such as a GPS navigation system or a stereo sound system.

They actually work quite simple: according to the producer, the Night Vision glasses are made of a special material which filter the incoming light, helping you to better observe the other cars or pedestrians during the night. The lenses are entirely made of Acrylic Plastics which reduce the total weight of the glasses to no less than 90 grams.

Besides extra-protection during night, the glasses are said to increase your visibility during daytime driving because they block 100 percent of the harmful UV rays and decrease the intensity of the sun light, similar to regular sunglasses but with extra-protection for your eyes. In terms of dimensions, the glasses have the same length as regular glasses: 5x2 inches.

Buying the Night Vision Clip-on Glasses isn't such an expensive investment because they can be acquired for as much as 8 dollars. Sure, there's the risk to feel uncomfortable while wearing the glasses during the night but, in case you're one of those drivers who are disturbed by the other headlights, you should really give it a try.