2 Is This Rider Blind or Stupid?

3 This Rider Can't Even Corner Right, Crashes Into a Focus

Wheelies. Yeah, they might look cool, but chances to destroy your motorcycle, yourself and other people start increasing as soon as your front wheel gets into the air. And this rider learns a hard lesson on the matter, proving anything can go wrong, and it’s best to stick to normal riding on public roads.
1 photo
You might be as skilled as a stunt rider, but if your machine fails, you fail along with it - there’s no safety net on the street, and that’s why stunt riding is being performed in a closed environment.

Which brings us to the guy below, reminding us of the classic crotch-rocket rider who thinks is invincible and is the reason motorcyclists are being generally considered organ donors by cagers - riding a GSXR, squidding, revving the s**t out of his bike at stoplights and popping wheelies on each occasion.

Regarding the last part, one of his latest wheelie attempts backfired badly, stealing his moment of glory and turning him from hero to zero in around a second and a half. Luckily, the crash happened at a low speed, sparing him from road rash or broken bones.

From the looks of it, he looks to be knowing what he’s doing, having been performed wheelies before, but this time, his Suzuki GSXR750 let him down. Literally. The rider says his “1st gear stuck while trying to shift from a stop 1st through 3rd gear wheelie”.

He seems alright after the hard landing, but the bike isn’t. It needed a platform and, despite being fitted with a stunt-cage, most of its nice metallic blue/white fairing is busted, including the headlight-dashboard area which completely came off.

If we’re ever going to be respected by car drivers, this sort of stuff must end on public roads. Wheelies, racing, burnouts and other doucheries are surely not helping in this undeclared war between riders and cagers. Respect to be respected! 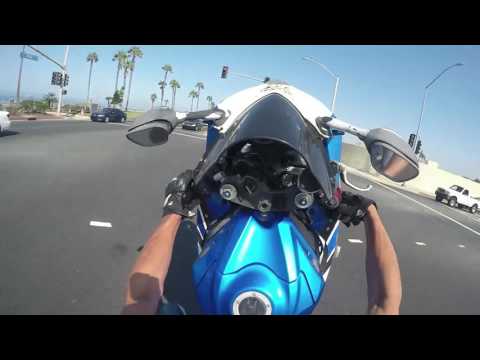