Mihnea Radu
To most people, engine families sound like funny names created with no particular reason, but they actually speak volumes about what sort of performance they can expect from each and every model they buy from a famous carmaker. Volkswagen has TSI, Citroen has VTi and Ford, well, they now have EcoBoost.
1 photo
Thanks to the success of its turbocharged engine family, “EcoBoost” is as much a household name as Topaware, Pringles and the Harlem Shake, but it’s one of the newest engine families out there.

So what is EcoBoost? This is the name given by Ford Motor Company, co-developed with FEV engineering and in production since 2009. But before we can tell you the technology that make an EcoBoost engine, we must first look into its history and what customer demands lead to its creation.

Give that everybody uses turbocharges now, you’d think this was commonplace, but for Ford it was a leap of faith. Most of its customers actually valued reliability and simplicity over increased economy. However, FoMoCo saw this was the way of the future and invested heavily, resulting in a total of 125 patents for the technologies that go into an EcoBoost engine.

Ford EcoBoost engines are designed to deliver power and torque consistent with larger engine displacement, naturally aspirated engines while also lowering fuel consumption by 20% percent if not more. The company even goes as far as to say its 1-liter engine is as good as any equivalent diesel.

The EcoBoost engine family was launched in 2009. V6 turbo engines stated being assembled at the Cleveland Engine Plant No. 1 in Brook Park, Ohio, and introduced to various SUV and pickup models. Meanwhile, the European debut of the EcoBoost family came at the e 2009 Frankfurt Motor Show.

Ford already had some of the most reliable small engines on sale in Europe and the US, natural stating points for the turbocharged versions. Adding to its Duratech technology, EcoBoost engines come with DOHC valvetrain, Direct Acting Mechanical Buckets, VVT, direct injection system and Bosch management systems with individual knock control. Something we like about turbo engines is that while Mazda is using very high compression rations, all EcoBoost motors use just 10:1 ratios. V6 motors sold in America use Honeywell turbos, while the smaller three- and four-cylinder units in Europe use Borg Warner low inertia integrated turbo systems.

Ford has always liked keeping it simple, so in fact there are only three types and four displacements of EcoBoost engine. So, without further ado, here they are: 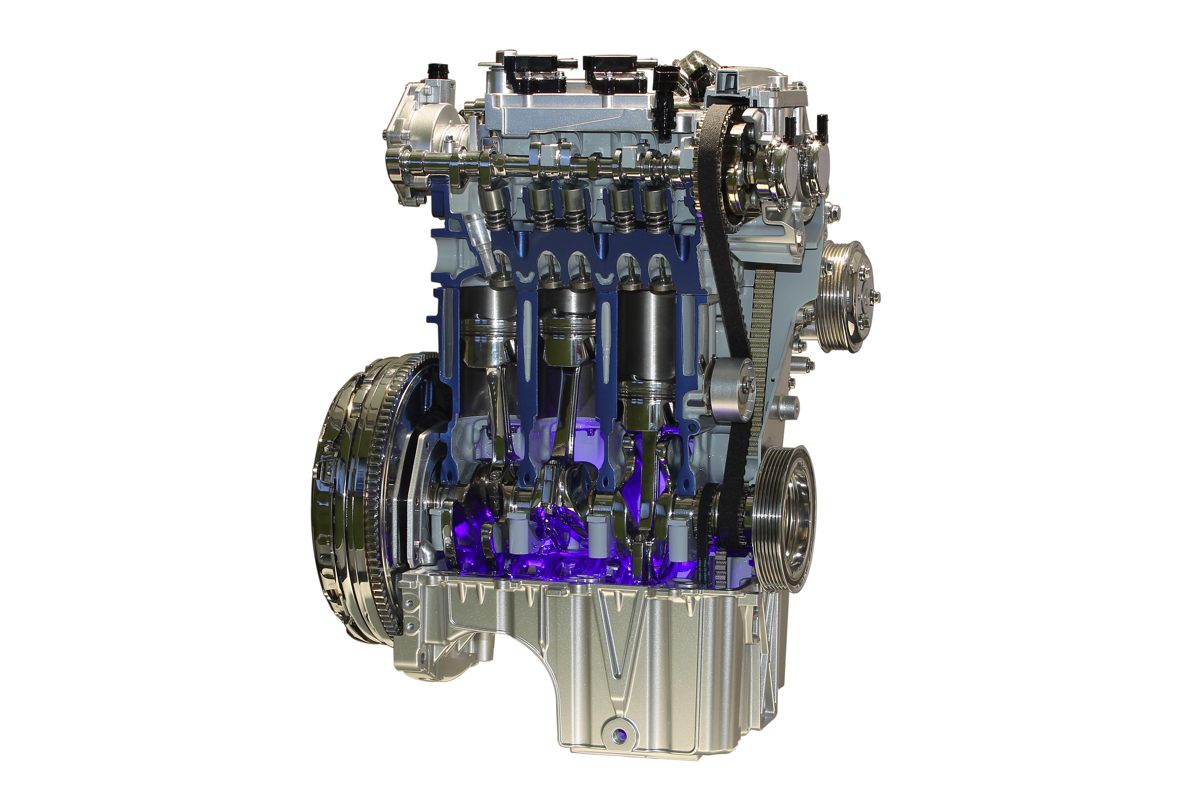 The smallest and by far the most revolutionary engine of the EcoBoost family is the 1.0-liter three-cylinder. The engine was developed by Ford’s Dunton Technical Center in the UK. Bench testing was very rigorous, pushing over 100,000 million on the bench and a few million miles in various prototypes.

Ford says this engine block is no bigger than a sheet of A4 paper, and while that might sound like a marketing scheme, the fact that the three-cylinder EcoBoost engine only weighs 97 kg (213 lbs) is very impressive.

Of the family, this is the only engine that makes do with a cast iron block. This makes it about 20% heavier than what it could have been if it was made from aluminum but ensures it warms up much faster, essential for the efficiency of the unit.

Initially, the 1.0-liter EcoBoost engine was heralded as an replacement to 1.4 and 1.6-liter engines but it is actually an alternative offered alongside its naturally aspirated cousins. There are two power versions, making either 100 PS or 120/125 PS. On the Fiesta Facelift, this three-cylinder engine is also offered as a non-turbo “Ti-VCT” units making 80 PS.

1.0 EcoBoost engines are assembled both in Cologne, Germany and Craiova, Romania. After Ford’s expansion into the Chinese market, it will also be available there. Ford’s American PR people have mentioned it being used in the yet-to-be-launched 2014 Fiesta, though we’ve yet to be assembled in North America. The engine is used offed with the Focus, Fiesta, new B-MAX B-segment van and C-MAX. It will also likely be available with the Transit Connect next year.

We think the 125 PS engine is a bit overpowered for a normal supermini like the Fiesta, so the most impressive applications are in the Focus hatchback. 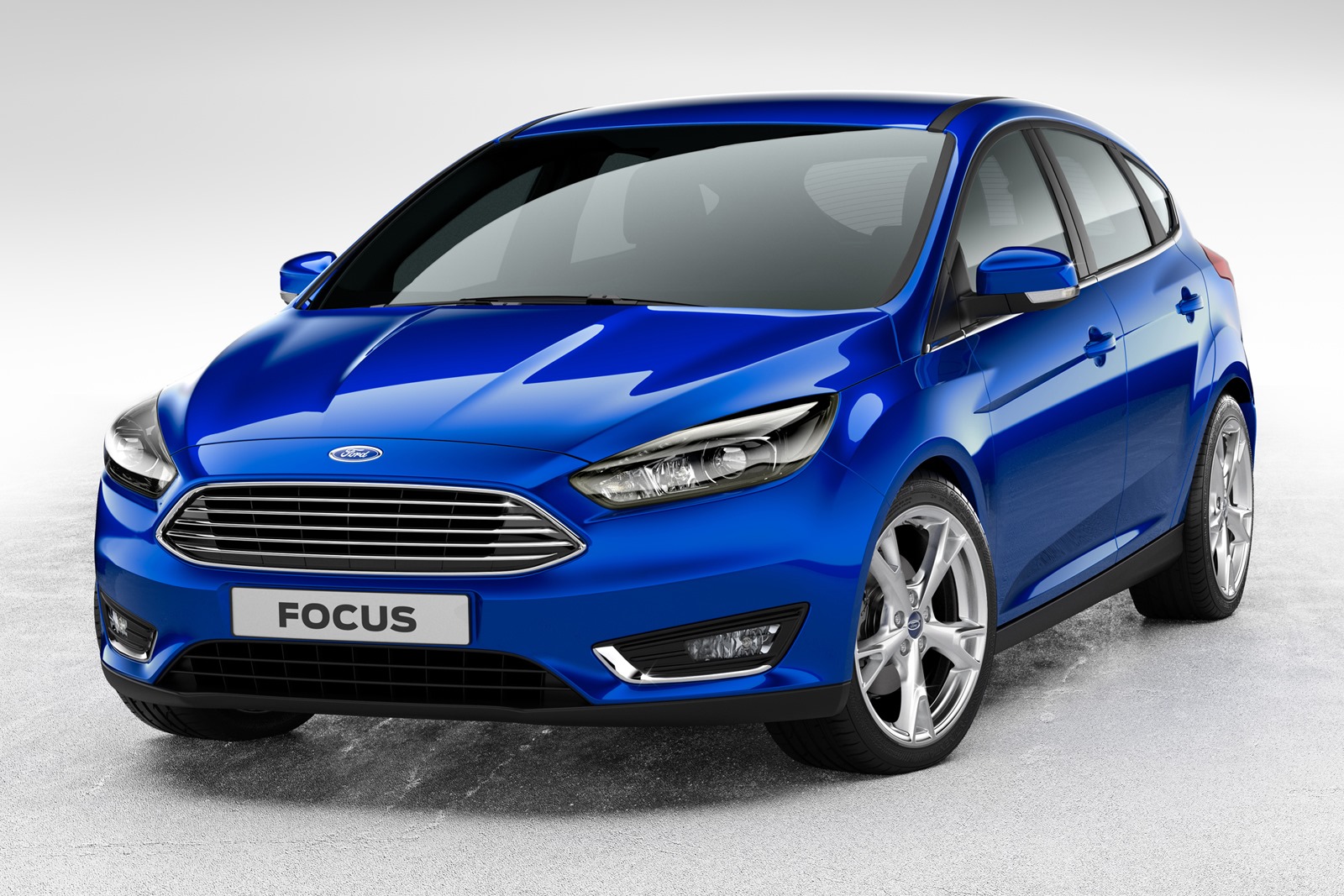 The Ford Focus facelift was revealed at the Geneva Motor Show in 2014. About three years into the third generation model's existence, the compact car received two brand new engines. Belonging to the EcoBoost family, the new 1.5-liter mills offer the same levels as the 1.6-liter turbo with huge increases in fuel economy. The base unit makes 150 PS, while the top-spec one offers 180 PS.

Both directly benefit from the technologies pioneered by the 1.0-litre EcoBoost – including an entirely new cylinder head design with improved cooling and integrated exhaust manifold for best possible performance and fuel efficiency, and reductions in weight and friction of both internal components and accessories to help deliver a more economical, smoother-running and freer-revving engine. The two mills will be available on European Focus models with a six-speed manual in 2014 and a six-speed automatic in 2015. 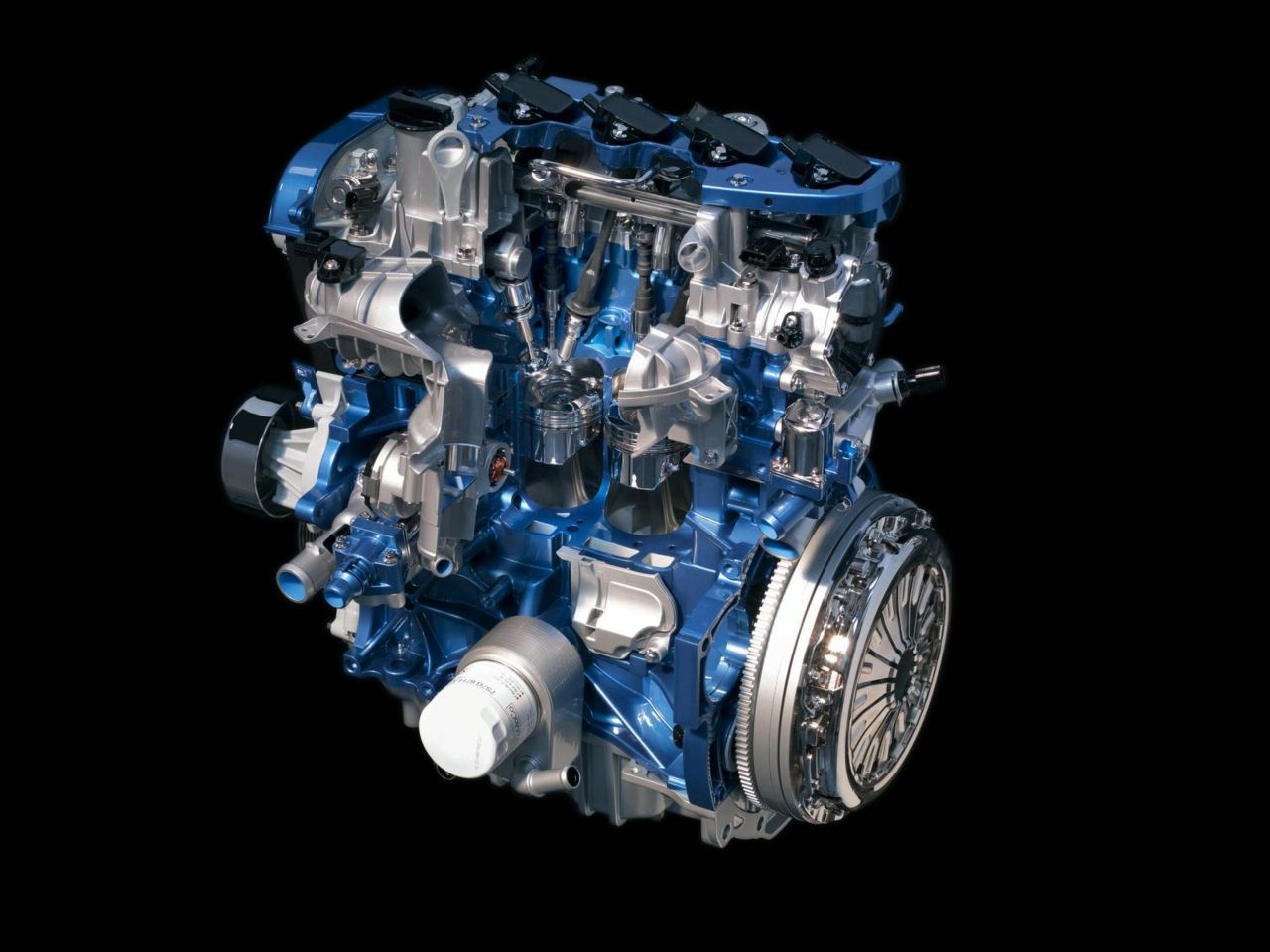 Ford has two EcoBoost L4 units, the 1.6-liter and bigger 2.0-liter. The smaller of the two replaced Ford’s 2.0-liter Duratec for cars like the Focus, while the other replaces smaller V6 engines. Since 2010, they’ve also been used by a number of Volvo sedans.

The 180 PS high performance version is used by the European Fiesta ST, as well as the Kuga/Escape SUV and 2013 Fusion Sedan. The most extreme road application is in the 197 hp (200 PS) 2014 Fiesta ST for the American market.

Ford’s other four-cylinder EcoBoost is the 2.0-liter. This makes up to 252 hp (255 PS though Euro model is rated at 250 PS) in the Focus ST hot hatch and is used in anything from the Galaxy minivan to Lincoln models. 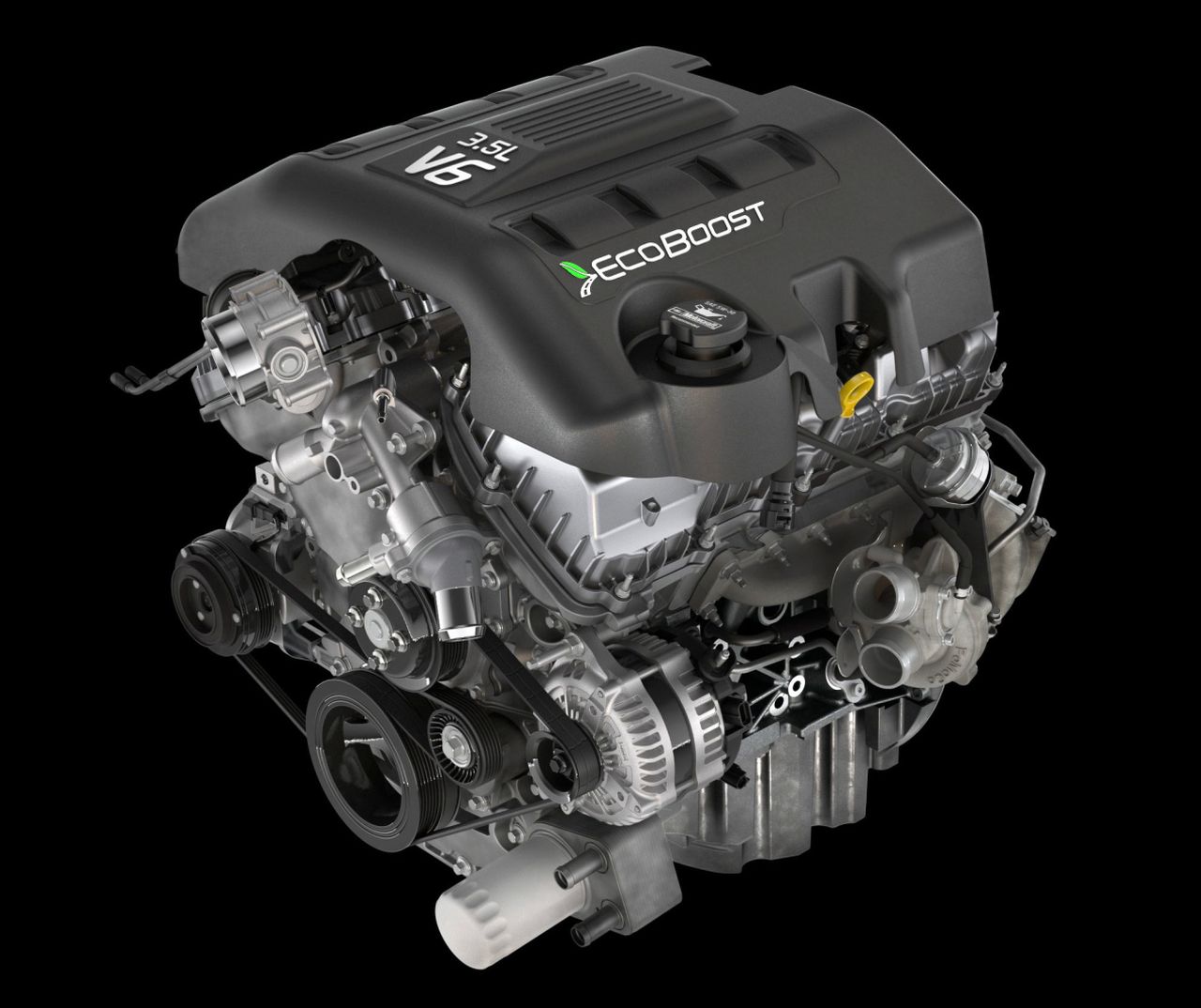 The Future of EcoBoost

Ford is going to continue focusing on turbo technology into the future, so we can expect it to become as common as TFSI is for Audi. The 1.0-liter unit will likely grow into a 1.5-liter for the Brazilian and Indian markets. The 2.0-liter EcoBoost will also be transformed into the all-important 2.3-liter 300 hp unit to be offered with the Ford Mustang and Focus RS. The torque and economy of the 3.5 L EcoBoost V6 will ensure it will continue to be used in pickups and SUVs for the foreseeable future.