2 How About Recharging in the Time It Takes to Refuel?

First EV Highway in U.S. to Be Built in Washington 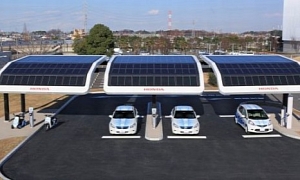 The times when electric cars struggled to catch up to consumer needs such as autonomy have faded away recently, thanks to the breakthroughs achieved in matter of energy cells. The wheel turned and now it’s time to start dealing with the big problem for electric cars: road trips. A nationwide network of charging stations is still a dream for most Americans. But in the Pacific Northwest, however, the first EV highway in the U.S. is on the way.

The Washington Department of Transportation announced it had selected the company AeroVironment to begin preparations at major roads for the future of fuel-efficient vehicles, as reported by popularmechanics.com. Starting this fall, the company will begin installing charging stations located off stretched of I-5 and U.S. 2 in Washington every 40 to 60 miles between the Canadian and Oregon borders.

The new stations will provide a larger step up in electricity compared to household versions. An electric vehicle will be recharged in maximum 30 minutes at a DC Fast Charging Station with an out put of 480 volts. Also, the station will include Level 2 chargers that could recharge an EV in 4-6 hours.

The major questions will be if the cars will be able to use the new infrastructure. At the moment there is a U.S. standard for Level 2 charging plug, but no U.S standard for the Level 3 DC fast-charger.