1 A Pink Bentley for Paris Hilton

2 Paris Hilton Shows Off in Her Pink Bentley 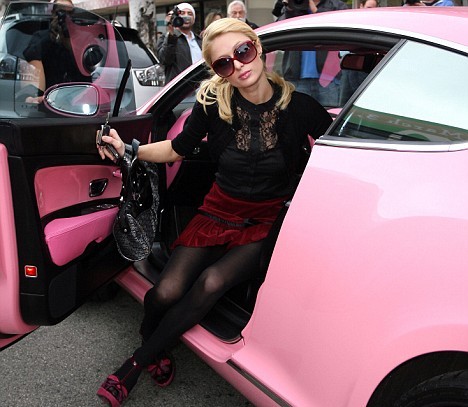 Since we like to keep an eye on the celebs and monitor their choice (and taste) regarding cars, inspired by the guys from Jalopnik.com, we thought of  showing you the hot cars female stars stab their high heels into.

Now, we don't want to rush to conclusions but when it comes to the car preferences of famous ladies but Bentley, Audi and Mercedes seem to be their favorite brands. And that shouldn't be a surprise taking into consideration the luxury and the performance these brands offer. And if we take account of the price as well, yes, the sentence is more than obvious: leaving away the exceptions, ladies that have achieved a certain degree of stardom do like spending their money on expensive cars that make them even hotter than their Photoshop-modified photographs on well-known magazines.

That being said, Kim Kardashian as well as Paris Hilton are fans of Bentley Continental. The last one has even customized a model according to her own pink tastes...Audrina Patridge, the cast-member of the MTV show “The Hills” Mercedes SL, while her film-colleague Lauren Conrad prefers an Audi R8. Another fan of Audi brand seems to be Sienna Miller as well who drives an Audi TT. Sienna is an American-born English actress, model, and fashion designer, best known for her roles in “Alfie”, “Factory Girl”, and “The Edge of Love.”

An obvious fan of Mercedes brand is Jennifer Garner who was spotted riding a black S63. The icing on the cake remains the Playboy playmate and reality television "star", Kendra Wilkinson who can not be framed into a specific pattern since she enjoys riding a black Cadillac Escalade. Last and to a certain degree the least, Miley Cyrus has recently taken her driving license and she will be seen on the LA streets riding her mom's Porsche Cayenne.

So, judging after the above-mentioned models, we can but say: female stars don't have bad tastes when it comes to choosing a car. Although the situation becomes a little bit monotonous with so many Bentleys in the picture...