Gabriel Nica
Out of the bunch of models BMW’s M division put in production, a couple stand out in the crowd as fan favorites. We could mention the E30 M3 that has a huge following as well as the E60 M5. However, there are other winners in this list too.
1 photo
Today, when BMW decided to go back to an inline 6-cylinder architecture for the M3, the E46 version is getting mentioned more and more each day. That’s because it was the last one to use this configuration, before the V8-powered E9x versions came out.

The E46 M3 is also one of the crowd’s favorites, mostly due to its handling and its brilliant S54 mill. On top of that, its design just seems to be immune to aging, looking modern even today, nearly 15 years after it was launched.

One of these is featured in the video below which is an exhaust comparison overall. The car it’s going up against? Another iconic M car, the E39 M5. What do these have in common? A couple of things actually.

They were built roughly at the same time, with small differences. They were also extremely popular within the BMW community and still are. However, that’s about it as the E39 is also the first M5 to use a V8 engine.

Up until this model came out, the M cars of the 5 Series range used inline 6-cylinder units. The E39 changed all that with a brilliant piece of mechanical engineering codenamed S62. That mill had a displacement of 4.9 liters divided between 8 cylinders positioned in a classic V shape. The output? 400 HP.

Now, we know that normally, there’s no point in making a comparison between two different architectures but we’ll make an exception, in this case since both of these cars are iconic M models. Without further ado, here's the S54 mill going up against the S62. Enjoy and let us know which one was your favorite. 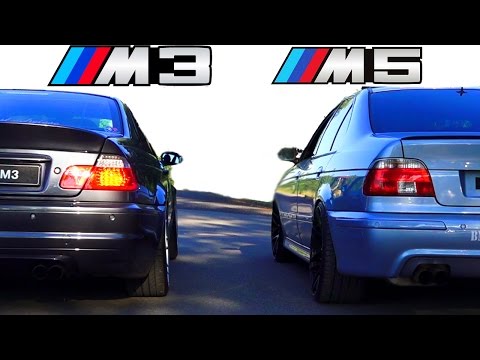