2 Drift Battle: Corvette Powered RX7 Vs. Kawasaki ZX-10R
Up Next 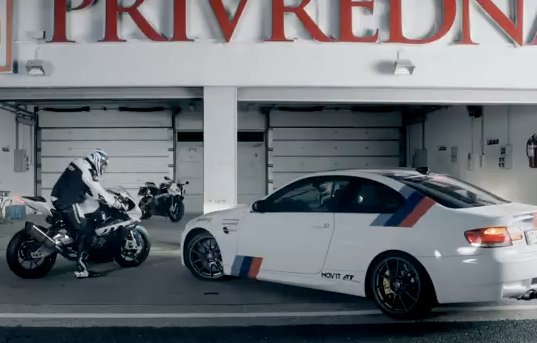 We always enjoy seeing a car vs motorcycle battle, but when both are made by the same company (BMW) and tuned by the same company (Akrapovic), the race promises to have all the ingredients to keep you from blinking while watching it. This time, we ran into a video showing a racing duel between a BMW S 1000 RR motorcycle and a BMW E 92 M3 vehicle, both sporting an Akrapovic exhausts.

Dubbed The Chase, the vid is resumed like this: “Rico and Nico are friends and they wanted to find out which one's faster: A BMW RR or a BMW M3. We gave them the chance for a little extra tuning, put them on a racetrack and filmed the race.”

We get to see each vehicle being fine tuned and dyno-tested at the Akrapovic factory in Ljubljana. The RR and the M3 were positioned at opposite ends of the track and then raced toward each other, with the winner being the one to cover the greatest distance before they passed.

"It was very exciting, you could hear and feel the engines and I wanted to get a sense of that intensity and for the power of the car and the bike. It had to be real," film director Ryan McManus said.

"We didn't know ahead of the race who would win. Most people were saying that it would be the bike and I certainly thought that - the bike did start off really well and had a great lead, but then the rain came and it really slowed it down, so we were all wondering," he added.

Though it was hard for us not to reveal who won this race, we decided not to spoil the surprise for you. So, you can see for yourself which machine emerged as winner by watching the video below: