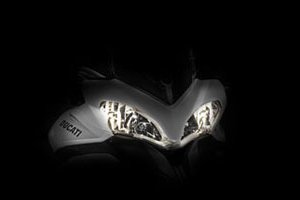 The upcoming show in Milan, promises to come with plenty of goodies for motorcycle enthusiasts. The latest to reveal what it has up its sleeve is Italian manufacturer Ducati, who confirmed the Multistrada 1200, will have its official public presentation at EICMA 2009 International Motorcycle Show.

“Ducati have designed a motorcycle to tackle all kinds of journeys and road surfaces using technology derived from the Bologna made race bikes in MotoGP and World Superbike,” the company says in a press release.

“From a sport bike for outright excitement to a tourer for long journeys with passenger and luggage, and from an everyday bike which can breeze through the daily commute to an agile enduro able to tackle off-road routes, the brand new Ducati is transforms itself to suit the rider’s demands,” the release continues.

The company promises a completely new, but purely Ducati look and style motorcycle, which is moderately priced, while keeping high standards in safety and comfort. The heart of the Multistrada 1200 is derived from the World Championship-winning Superbike 1198 Testastretta engine, modified to provide both smoothness and tractability (improved low-end torque).

The new bike is tehrefore expected to be as much a tourer as a sportbike, allowing for both passenger and luggage to be accommodated. Ducati also describes the new model as “an everyday bike which can breeze through the daily commute to an agile enduro able to tackle off-road routes.”

However, if you cannot make it to the show in Milan but still want to see the latest contraption from Ducati just as it is introduce to the general public, you can keep track of the model thanks to the countdown website, which currently features a video teaser.