2 Spoil Your Kid With An Electric Polaris Slingshot

5 Green Chrome Wrap for Pocket Bikes and More
Car video reviews:
Up Next

Drag Racing Pocket Bikes Is Funny But Sometimes It Hurts

The video you are about to see here is about how someone’s trash can be others’ treasure and how this could also backfire and you lose your teeth.
1 photo
According to the guy that posted the clip, his friends found these two 33 cc Chinese pocket bikes on the side of the road, waiting for the bulk trash pickup. They asked the owners if they could take and have some fun with them.

Believing the tiny bikes are damaged beyond repair, the owners were happy the two guys would take them away so they accepted. The two brought the bikes to the OP here, who tinkered a bit with them and managed to make them work again.

And how do you test some machines after they’ve been through intensive care? By doing a drag race just outside the shop. Of course, being such small machines, no one had any riding gear, but it was the dude with flip-flops to pay the price.

Apparently, it’s not that of a good idea to hop on a bike you don’t know (be it a pocket bike) and give it the beans. According to the description, when the rider put his weight onto the peg, the rubber on the peg slid off, causing the foot to drop and drag on the ground.

Considering how cramped an adult sits on a pocket bike, you can imagine there’s no room for recovering from such a failure. So the guy’s leg fell onto the ground, sending the rider face forward to the pavement.

It’s nothing serious, apart from a few scratches, but this demonstrates how easy it is to crash even on a 33 cc bike for kids. So next time you see a beginner rider abusing a small-displacement bike or scooter, show him this clip and tell him to straighten up. Being on two wheels is still a dangerous business, no matter how big the engine is. 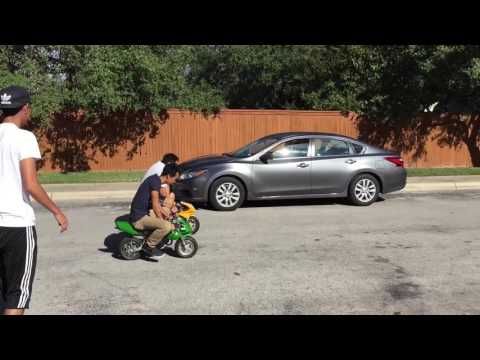