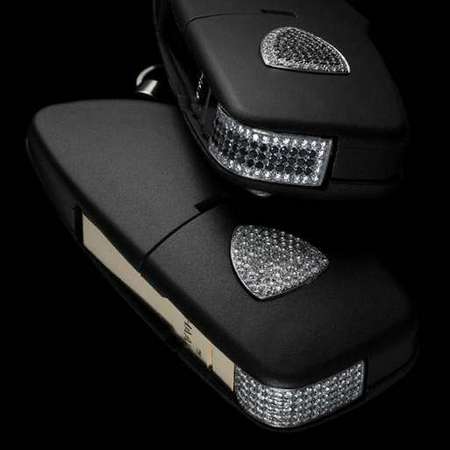 Losing you car keys might begin to be an expensive deal from now on if you decide upon buying Amosu's luxury novelty. In case you happen to be among the happy Lamborghini owners, the new gadget for car keys might appear extremely tempting.

Assuming that a luxury car is nothing without a key to show the whole world what car it is, Amosu tries to give you a hand to solve the problem. That's why, you might think taking into consideration their new leather case for car keys, beautifully-decorated with 183 sparkling diamonds for a total of 2.02 carats. In comparison to the owned car's value, the gadget's price is almost a bargain. So, if you afforded to pay for a Lamborghini, you must be aware of the fact that you also bought a lifestyle where having the flashy gadget for the sum of £7,000 (nearly $10,500) becomes a necessity.

Amosu Luxury is a company that has become famous for its ideas of turning ordinary items like mobile phones or key fobs into genuine jewelry. However, in the case of the precious car key holder, Lamborghini does not benefit from exclusivity. The company designs similar items for other expensive vehicles such as Mercedes-Benz, Ferrari and Bentley. In fact, the last one was the first to have such a privilege.

Other gadgets of the same brand are already popular around the world. For instance, luxury cell phones produced in limited or special editions are already in vogue among select customers.

Whoever intends to purchase any of Amosu's products should first keep in mind that they are not only catchy but also expensive. The items may be pricey, but the image of you flapping the glowing gadget is definitely priceless!