1 Patrick Crashes Out on Nationwide Debut, at Daytona
Up Next 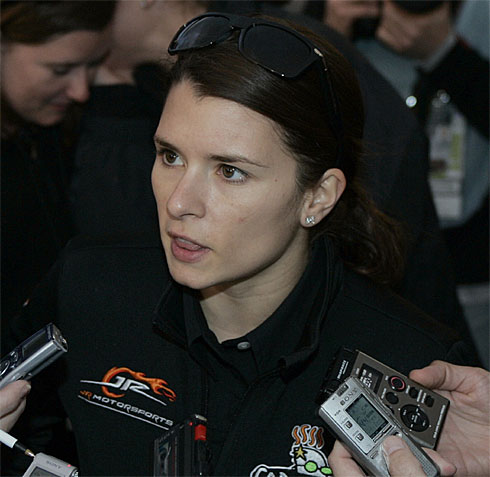 The not-so-good NASCAR debut for Danica Patrick (considering all the publicity surrounding her NASCAR entrance) continued this weekend at Auto Club Speedway, where the JR Motorsports driver managed to end the race in 31st place.

Patrick started the race 36th and, faster than predicted, fell to the back of the pack and was passed by Joey Logano, the man who led most of the Stater Bros. 300 race, after only 17 laps.

Patrick didn't do so well during the pit stops either, being penalized for speeding on pit row. Patrick acknowledged she didn't do so well, but she was encouraged by her crew chief, Tony Eury Jr, throughout the race.

"Thanks guys, sorry I sucked today. But I'll figure it out," she reportedly said on the team radio.

"You progressed a lot in this race, girl. I'm proud of you, what you've learned," the crew chief repeatedly told her during the race.

Patrick hopes to improve her driving as the season continues. She admitted that the trickiest part for her is to figure out how a stock car should feel. As far as the Stater Bros. 300 race goes, Patrick is pleased she managed to finish.

"I'm a competitor, and I'm used to running up front, so it's shocking when you go that far back," she said according to USA Today. "You know what? This is a whole new ball of wax for me, and it's all different. I have to disconnect from the results for quite some time because they're probably not going to be what I'm used to."

As for the race itself, Kyle Busch took hie 31st Nationwide win after passing the line 0.051 seconds in front of Greg Biffle.