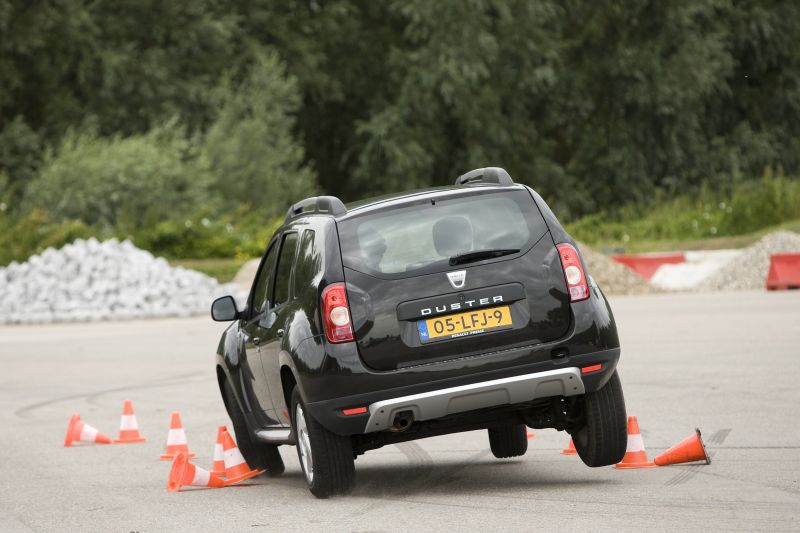 Renault's Dacia Duster has been another true hit for the French manufacturer in recent months, as customers from around Europe have signed up on long lists to have one as soon as possible. However, not everything is bright and shiny on the Duster street, as some recent tests from ANWB – Dutch correspondents for Germany's ADAC – in collaboration with Dutch magazine Autokampioen showed some handling issues with the car.

The guys at ANWB wanted to see how the Duster reacts when trying to avoid an obstacle at high speed, so they've tested two different versions of the car. The first one was equipped with four-wheel drive and benefitted from ESP, while the second was only front wheel drive and had no ESP.

The test was a simple one, conducted at a speed of 65 km/h (40 mph), with the driver trying to maneuver the car between the cones. A modern version of the moose test, if you like.

The good results were recorded only for the 4X4 version of the car however. In the second test, with the two wheel drive model and no ESP, the inside rear wheel of the Duster took off the road and the car seemed like it was ready to roll over at the end of the maneuver (although it didn't).

Shortly after the test, Renault were contacted to give an explanation for the car's behavior. Nevertheless, the findings did not scare the French one bit, as they assured the clients that Duster was designed in such a way that it doesn't present any rollover risks and that each version of the car will have ESP by March 2011.

Additionally, the Dutch repeted the test in the presence of the French officials days later, and apparently the results were not that worrying. According to some sources, the ANWB admitted that the handling issues were not that grave in the second test, and the initial results might have been affected by the different asphalt temperatures.

autoevolution tested the 4X4 version of the Dacia Duster (without ESP) a couple of months back. Curiously enough though, we didn't seem to find any issues with its handling. For a more thorough look into our experience at the wheel of a Duster, you can check out our review here.