The Sandero was the best selling model of the Romanian car-maker Dacia, with over 2.1 million units sold in just three years, and the Stepway version was responsible for 65% of those sells.

Dacia unveiled the second generation of the Sandero Stepway in 2020. The hatch-back version of the Logan was a European hit due to its small-class exterior size, compact-size interior room and budget price. That recipe was important and just a few customers cared that the car was fitted with old Renault parts. The car worked and the reliability index was high.

Dacia designed the Sandero Stepway as a true, budget alternative for other small crossovers. Even if it shared some parts with the regular Sandero, that trim-level showed a few styling differences. The front side featured a gray plastic shield under the bumper. From the sides, the black moldings around the wheel-arches enhanced the crossover look. The roof-rails featured a clever system that allowed them to be installed both longitudinally and transversely. A gray plastic shield enhanced the look for the rear bumper.

Inside, the Sandero Stepway featured orange lines on the vents. The lettering “Stepway” was embroiled on the front seatbacks. For the instrument cluster, the designers didn't struggle too much and took the same panel designed for the Duster, the 4x4 SUV from Dacia. For the rear passengers, a split-fold bench made its appearance for the first time in the Sandero Stepway range.

At the time of its launch, the Sandero Stepway was available with a choice of three engines. The base version featured a 1-liter, three-cylinder unit. A turbocharged 1-liter unit powered the mid-level, and the top version was the 1.0-liter bi-fuel (gasoline-LPG) engine that developed 100 hp. 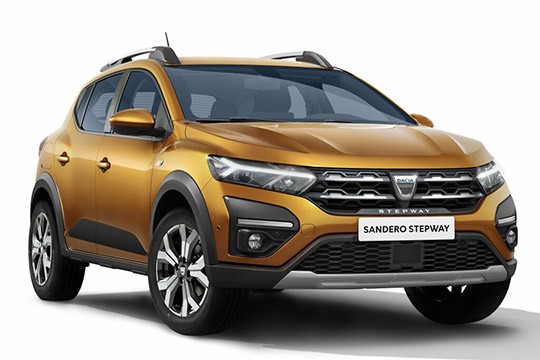