Home > News > U-turn
Gabriel Nica
There are few things dads wouldn’t do for their kids, just to make them smile and be genuinely happy. If the kid is also a gearhead, inheriting the passion from his father, things are even better. We’re guessing it’s the case here, where an ingenious dad is seen helping his son drift a Cozy Coupe.
1 photo
The footage was posted on Youtube more than two years ago and it’s seemingly making a comeback as some publications are starting to pick it up again. In it we can spot the ‘dad’ on his bike, pulling his son inside a Cozy Coupe behind him.

We’re guessing that the man is a gearhead, even though he’s riding a bike in this video, as he gets this crazy idea in his head: what if my son could drift his toy car?

Acting on his instinct, the man starts driving in circles and, what do you know, the kid starts drifting. What’s even more impressive is that he seems to have been trained and taught how to do it. If you look closely, you’ll notice some opposite lock on the front wheels, a sign that he’s either doing it instinctively or that somebody told him what to do.

Either way, we never expected to be so entertained by a Cozy Coupe, especially in this day and age when the ‘Coupe’ title is used even for various sedans. This time though is more than rightfully used. 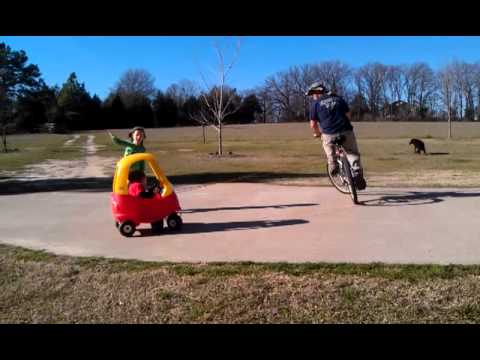