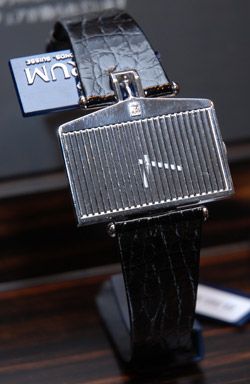 It's not only Breitling that is producing watches as a tribute to Bentley, as it appears that someone else has done a similar thing even earlier.

In 1976 Corum did the same thing for Rolls-Royce and the result was an extremely elegant automotive styled watch, luxist.com reported.

It took a little time for Corum to make Rolls-Royce provide them with a license, as the same source claims, but the result was worth the convincing effort. Apparently, there was a high demand for the exquisite Rolls-Royce watch, but unfortunately for the mass public, it never had the pleasure of a wide scale production.

However, let's see what's so special about this Corum watch besides the association with a Rolls-Royce vehicle.

Well, the watch features a 18k white or yellow gold case which was modeled after the trademark Roman temple styled Rolls-Royce automobile radiator grill with the flying lady hood ornament.

In case you are wondering "but where the heck is the watch's face?", the answer is... inside the grill and could be seen only through the vertical column bars. The watch itself is powered by a mechanical movement, but it looks to us a little bit difficult to read.

But after all, who cares about time when you're in a Rolls-Royce Phantom Sapphire? The Corum-Rolls-Royce watch could be more like an accessory to fit the car you're in than a true time indicator.

Of course, there are still enough collectors in this world who would pay big bucks for such a historic luxury item in case they get the chance to see one.