2 Mercedes-AMG Expects to Sell Over 40,000 Vehicles By the End of the Current Year

Gabriel Nica
When taking a quick glimpse at the specs of the new Mercedes-AMG GT one could easily say that it’s not really that impressive. Take a closer look at the prices too and you might be tempted to say that it’s way overpriced.
1 photo
However, you’d be wrong. But in order to realize that you need to go more than skin deep. That’s a job that Chris Harris took upon himself and, before reviewing the new car on the Mazda Raceway, he went behind the scenes and took some time to explain the underpinnings.

As it turns out, the AMG GT is the natural successor of the SLS AMG. Therefore, it brings forward improvements in the key areas where its forefather had problems but also keeps some of its features.

For example, the front axle was taken straight off it, as it was deemed more than capable of handling the new engine and transmission this car has. At the same time, the rear axle is completely new and incorporates a reworked version of the 7-speed dual-clutch auto box that is now faster and more intuitive to work. In doing so, Mercedes solved yet another problem that people complained about in the SLS.

There’s also a carbon fiber prop shaft taking the power to the box from the engine bay as well as bearings that connect directly to the body of the car for more control. So now that we know a thing or two extra about the GT, let’s take a look at it on the track.

According to Chris here, the car feels absolutely planted. The engine that features two turbochargers fit inside the Vee seems to be showing absolutely no turbo lag, a thing that we’ve also heard of in the case of the new M3 from the same journalist. Could it be just a gratuitous compliment?

We don’t know for now but we’re hoping to find out when we’ll be testing the GT ourselves. In the meantime, we know that the M4 truly has no lag so we tend to agree with Mr. Harris here. As for the rest of the review, you tell us what you think of it, after watching it below. 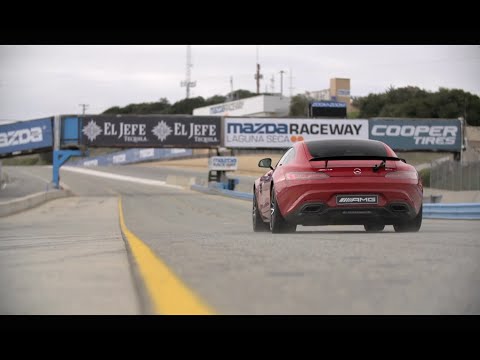