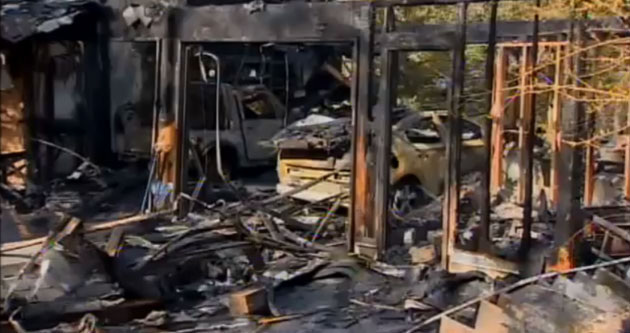 The electric vehicle world is taking hit after hit these days. After Nissan's Leaf was plagued by a problem at restart (a problem which prompted Nissan into announcing some type of recall, the first ever in history for an electric vehicle), Chevy's Volt is now feeling the heat of unwanted events. Literally.

The owner of a garage, a Chevrolet Volt and a Suzuki Samurai (it's worth mentioning the Samurai had been modified by the owner to run on electricity) found all three of his possessions nearly ruined in a fire that ignited out of the blue a few days ago. At the time, the owner, Storm Connors, as well as GM reps, said that it was not the Volt that caused the fire, but only a victim.

Strangely enough though, sources say that after the initial fire broke and was put out, the Volt caught fire again, this time, apparently, from where the battery is located.

The mystery is deepened by the fact that before the first fire, the Volt was plugged in, recharging over night (as was the Samurai); in the second fire, however, the plug-in hybrid (what was left of it) was not connected to a power source.

GM promptly reacted to the news, sending a team of investigators in Barkhamsted, Connecticut, where the fire occurred. GM's people seem to have found no actual problem with the Volt, although the car maker is not jumping to conclusions.

“We believe the findings indicate the Volt was damaged by the fire, not the cause,” said GM in an official statement. “While the Volt's battery pack sustained damage, it was not extensive enough or of the type that would suggest that it caused the fire. In addition, there is clear evidence based on moderate damage to the cordset and charging system that neither component caused the fire.”

“The most important thing to remember is that everyone is safe and fire investigators are working diligently to determine the cause.”