We have been talking for an awfully long time about the upcoming Hyundai Santa Cruz pickup truck. Actually, we can pinpoint where everything started – the rumor mill kicked off in high gear with the 2015 Hyundai Santa Cruz Concept, but the South Koreans have been progressing slowly.
13 photos

While we patiently wait for the automaker to finish each development stage, we can still quench our thirst for knowledge with the latest render of the Santa Cruz, courtesy of YouTube channel AtchaCars. They took the latest batch of spy shots that were released onto the all-mighty Internet and decided they would play with the possible color palette as well.

The results of the stylishly colored truck are pretty self-explanatory. Hyundai is updating the half-a-decade old design of the Santa Cruz prototype with the latest styling cues as seen on the current crop of releases – we see influence coming from the eighth-generation Sonata family car and even from the luxurious Genesis GV80.

If everything we see here turns out to be true then Hyundai’s offering will certainly stand out in the segment where it will fight the likes of the Tacoma. By the way, in case you thought Hyundai is a late entrant into the utility truck market with the Santa Cruz better think again – it has produced its own pickups since way back in 1977.

They have just one model, though – a cabover truck that goes by the alternative names of Porter and H-100 depending on the sales market. Of course, the latter is very different from the stylish Santa Cruz offering, a model we bet will also share a lot of exterior and interior elements with the next-generation Tucson SUV.

The latter might actually come out ahead of the pickup truck and keep the fancier elements for itself – the Santa Cruz is certain to adopt a few extra rugged cues just to make a name for itself among off-road aficionados as well. Time will tell, but we can already see one pickup truck that needs to fret sharing the quirky niche - Honda's Ridgeline. 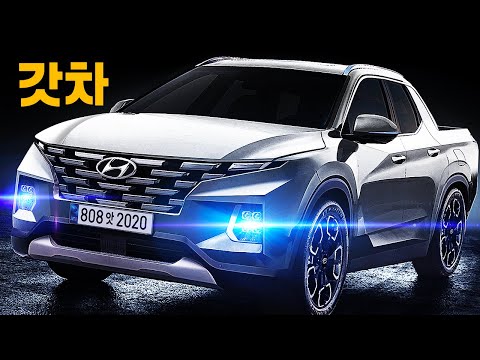