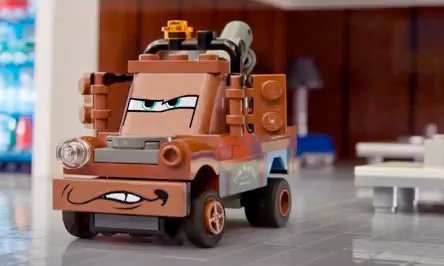 The LEGO fever is like a never ending play frenzy that minds no gender, age or social class. Just like animated films such as Cars 2. Having that in mind, Disney, Pixar and LEGO commissioned Patrick Boivin to re-create the movie trailer in celebration of the Cars 2 line of LEGO play sets.

As you can see in the first video below this article, the original trailer for the upcoming animated sequel movie is frame by frame re-created using thousands of LEGO bricks.

But be careful, as it did with us here at autoevolution, the direct consequence of watching the clip could be a instant need to purchase one of those play sets for yourselves and ignore the fact that you might get caught up the game day&night. So don’t say we didn’t warn you.

This means that if the regular trailer video might have left you pondering on whether you should bother to buy tickets to see the movie, this LEGO incarnations of Lighning McQueen and Mater might help you react positively.

However, if you’re the type of guy or gal who hates spoilers, you might want to skip the new featurette with never-before-seen footage from the film (second video).

Meanwhile, we’ll refresh your memory by telling you that the Cars 2 hits theaters on June 24, 2011. If you haven’t had the time to document yourselves in regards to the movie, you might want to check the specs on all the fast-pacing cars in the movie, and believe us when we say, they aren’t just a few.