We’ve seen all sorts of drag racing videos over the years and most of the time they feature cars being launched in near-perfect conditions to see exactly how the driver and car perform at their best. However, if you own a car and you ever ‘went for it’ at a red light, you probably know that in real-life things aren’t like that.
1 photo
Think of it maybe as the difference between sex scenes you see in movies and what happens in real-life. They are miles away, aren’t they? Well, it’s the same here.

That’s why when manufacturers brag with their launch control features that are supposed to offer you the best start possible, they should probably also focus on making them easier to activate. That’s because you might be surprised of how far along your rival might be by the time you finish the procedure.

The guys from Auto Express put that to the test and they got four cars together to compare them straight up. Three of them are pretty close in performance while the fourth is the surprising outsider.

No, it’s not the GT-R but a more... conventional vehicle. Yes, we’re talking about a Polo BlueMotion that’s one of the most popular cars on European roads today.

On the other hand we have a Porsche 911 Carrera 4 GTS, a BMW M4, and a Mercedes-AMG C63 S. All of these cars have the potential to obliterate the little Volkswagen in a drag race but they will be held back by the time needed to activate their respective Launch Control features.

The system on the Porsche is easy to operate: get the car in Sport Plus mode, keep the brake pedal pressed and just mash the throttle. The M4 requires you to come to a complete stop, turn off the DSC or enter Sport+ mode, tilt the gearshift lever to the left, in Sport mode and mash the throttle beyond its kick down point.

On the AMG you have to enter Sport or Race mode, keep the brake pedal pressed, pull both steering wheel paddles at the same time and when asked whether you want to activate RACE START, pull the right paddle. Care to guess who won? 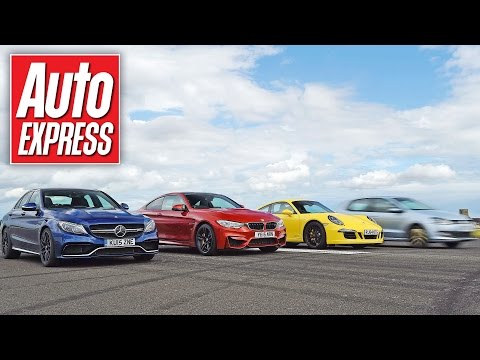