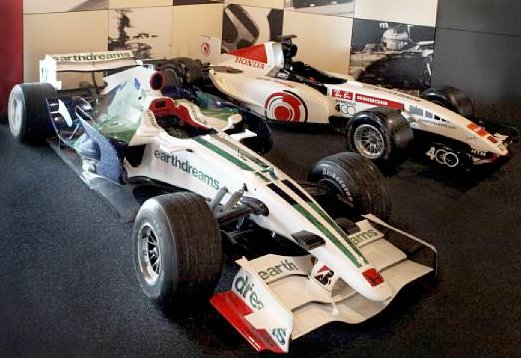 Brawn GP have teamed up with Bonhams to auction a selection of race cars from their memorabilia collection at the Silverstone Classic Historic Race Meeting on July 25. The lots offered include historic race cars, scale 1:1 show cars and a range of items from the team’s collection.

The Formula One cars to be sold at the event are dated from 2001 to 2006 and cover the ownership periods of the team by British American Tobacco and Honda Motor Company.

The cars have been driven by top drivers including former World Champion Jacques Villeneuve, Jenson Button and Rubens Barrichello. The race and show cars will be in rolling chassis form (without engines or other ancillaries), with estimates expected to range from 7,000 to 22,000 pounds.

“All Formula One teams accumulate a fairly large collection of race chassis over the years and the timing of the Brawn GP sale could not be better. The team have been the undoubted stars of the 2009 Formula One season and this sale enables collectors and their legion of fans to acquire some fabulous historic lots,” commented James Knight, International Managing Director of the Bonhams Motoring Department.

Nick Fry, Chief Executive Officer of Brawn GP, said the team “is extremely proud of our heritage with British American Tobacco and Honda, and we have inherited a vast collection of historic race cars and memorabilia from the team’s early years. We are delighted to be able to give collectors and our fans the opportunity to share in our history and purchase some fantastic items, including actual race cars, through this unique sale.”

The Bonhams auction is open to all Collectors’ motor cars and will take place on Saturday 25, July. The overall featured marque at this year’s Classic is Jaguar and the Bonhams sale will have a special section devoted to the famous “leaping cat”.