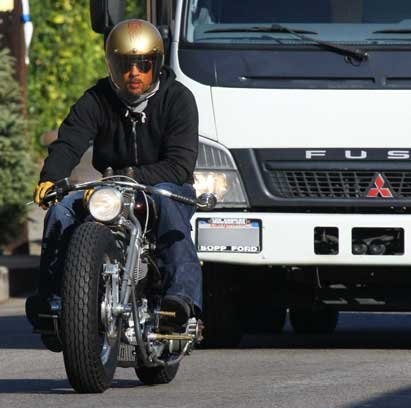 The life of a super-star might be extremely exhausting with paparazzi following you everywhere, writing about every move you move and every step you take. A big price to pay for starring in the hottest movies in the entire world.

It's not the first time and, surely enough, not the last one when a celebrity is spotted by paparazzi while enjoying a peaceful ride on the motorbike in the L.A. territory. That being said, TMZ managed to photograph Brad Pitt on L.A. streets riding a customized motorcycle on Wednesday.

The actor had returned in the United States after spending his holidays abroad and now he seems ready for some fresh action. The “Mr and Mrs Smith” star surely knows a lot about safety on the roads, so he wears a helmet when enjoying his rides in his motorbike.

It's understandable that Mr Joe Black doesn't intend to carry the whole family on his motorbike (meaning Angelina Jolie plus his six kids) but we do wonder: isn't it a little bit too small even for a single person?! Because judging by the photo, Brad seems to sit a little bit uncomfortable... But since we can not comment on the man's tastes regarding motorcycles, we won't go any further with this.

And speaking about stars on bike spotted by paparazzi in let's just say “unflattering” positions, you probably remember a few months ago we wrote about Keanu Reeves being assaulted by fans while riding his bike. Even if he seemed to ignore the whole scenario he was unwillingly part of, the photo with Neo caught in the traffic with a bus full of fans behind is surely priceless.

Now returning to our 45-year-old actor, Brad Pitt, did you know that he “hates”  the paparazzi? He might be upset for following him everywhere but come on, it's not as if they had published photos with him holding pink three-layered toilet paper in the right hand while “taking a visit” to the hotel room's loo! So chill out!