2 AC Schnitzer Shows Off with Brand New Clip from Geneva

When we first heard about BMW releasing a 4-door version of the M6 we thought it could never work. "It will be a definite fail," said the voice inside our head. However we kept our hopes up, knowing that if anyone could pull it off, it would be the German engineers from Bavaria.
1 photo
After a couple of months, the Gran Coupe made its first appearance at Geneva in Geneva. From the first look we fell in love. The BMW designers and engineers pulled it off once again. However, at Geneva 2012 the car on display was a simple Gran Coupe, the M6 version would have to wait a little more.

The M6 Gran Coupe was unveiled for the first time at the North American International Auto Show in Detroit in January, and everyone took a step back when the curtain was pulled. It's just amazing and some of us would even call it the best looking BMW of today.

The carbon fiber roof fits perfectly between the metallic front and back of the car. The M design features make it look even more powerful and angry than usual and everything about the design also has a function. The large front air intakes help cool the engine whilst the side mirrors have been specially optimized to further improve the aerodynamic coefficient.

The ceramic brakes and the golden brake calipers are eye catching and highlighted by the special design of the wheels. The most impressive thing about this car though is the fact that it doesn't look extremely different than the M6 Coupe and still offers so much more room. BMW did a great job once again and proved that anything is possible, even a 4-door coupe that stays elegant and sporty at the same time. 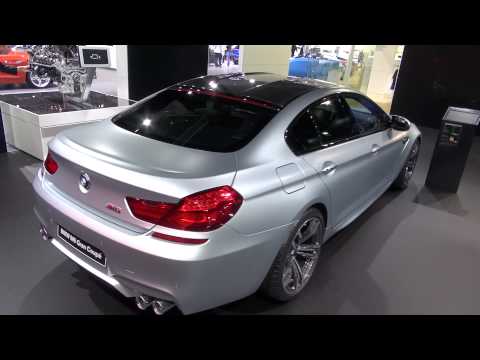