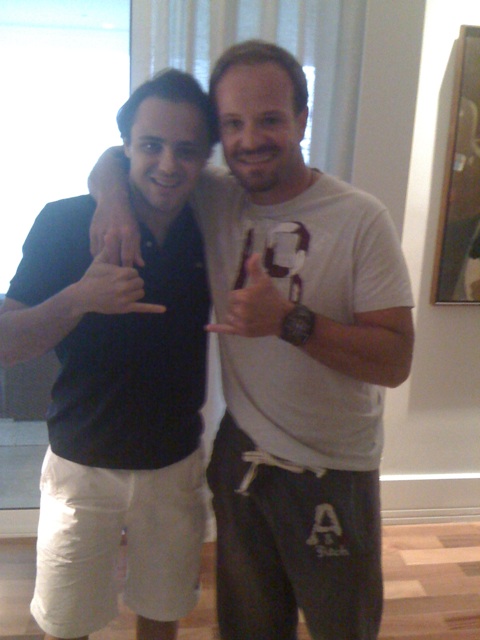 While some are enjoying their second vacation from Formula One this summer, Rubens Barrichello used it to pay a little visit to his fellow countryman and friend Felipe Massa. As the Brazilian is quickly recovering from his accident in the Hungarian Grand Prix at home, Barrichello decided to see how his recuperation goes with his own eyes.

We're sure everybody knows this by now, but it was actually a piece of Barrichello's car that hit Massa's helmet during the Hungaroring qualifying session, causing him multiple fractures to his head and some slight eye damage. The Brawn GP driver was the first who walked away from the Hungarian track and headed right to the AEK hospital to check up on his friend, while later admitting he feels awful about the whole incident.

With Massa's medical situation much improved nowadays, Barrichello decided to spend the afternoon at his friend's home in Sao Paolo. When he got home, he quickly posted a picture of him and a smiling Massa on his Twitter page, joined by some comforting news for the Brazilian's fans.

“He is fine and exactly the same person as before, thank God. I loved the afternoon ... he was so well and in good spirits,” said the 37-year old Brazilian.

The Brawn GP veteran insisted, however, that the reports regarding Massa's potential return to F1 racing from as early as the Italian Grand Prix at Monza are a bit optimistic.

“On Felipe's comeback we need to be patient, he has to be 100 per cent before driving again (but) he doesn't lack the will,” added Barrichello.