1 Better Stick With NFTs: Artist to Sue for Fraud Over Invisible Sculpture

5 London’s Public Transport Agency Would Like Banksy to Come Back for a Do-Over
Car video reviews:
Up Next

Modernized Lancia Delta S4 Is a 1,000 HP Dream of a Rally Car

We’re heading towards a fully digital future, including where art or real estate are concerned. NFTs are part of this future, one in which our possessions lose physical shape but not their appeal.
6 photos

Banksy, arguably the world’s most famous and highly valued guerrilla artist, is also going digital. One of his artworks, the 2005 Spike, is getting the NFT (Non-Fungible Token) treatment, having been listed at auction on Valuart late last week. The event will close at the end of the month and, for the time being, bidding sits at 5 Ethereum, which is equivalent of $11,530.

That’s a small amount for a work of art by Banksy, but then again, this isn’t really a Banksy, is it? Furthermore, Banksy isn’t even involved in the sale and, as far as we can tell, he didn’t sign off on the conversion.

Spike came to be after Banksy got his hands on a piece of Israel’s West Bank Barrier in 2005 and put together a treasure hunt. Whoever would find the piece of rock and email him the secret word on it ("spike," you guessed it) would get the rock as a reward. Considering this is Banksy we’re talking about (earlier in 2021, his Game Changer piece, which he dedicated to the NHS, sold for a record $20 million at auction), this was no small reward.

After changing a few pairs of hands, Spike ended up with Italian opera singer Vittorio Grigolo, and he’s the one responsible for the NFT conversion. Grigolo is also one of the co-founders of Valuart, and he’s lending his own voice to the music in the NFT: a fragment of the Puccini aria “E lucevan le stelle,” which plays as the rock spins in place over a body of water.

ArtNews notes that selling art, digital or not, without approval from the creator is copyright infringement, but Grigolo insists his NFT isn’t a digital copy of the original, of the physical piece, but a piece of art in and of itself. It is an NFT installation that only draws inspiration from the original artwork.

All possible legal complications aside, if you have some crypto lying around that you’re willing to part with, know that the Spike NFT also comes with extra perks, like the chance to see the actual Spike in Switzerland and a dinner date with Grigolo and the other founders of Valuart. 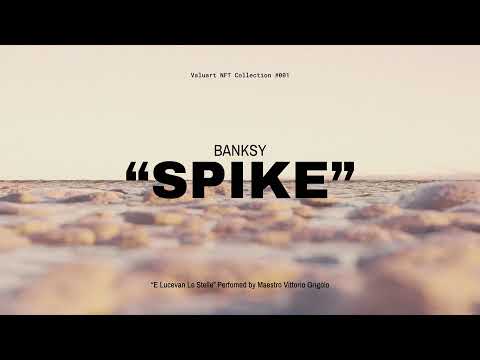