For those of you that don’t already know this, wind tunnel testing were initially aimed at conducting aerodynamic research mostly involving aircrafts. The first enclosed wind tunnel for aeronautical purposes was designed and operated in 1871 by Francis Herbert Wenham from the Aeronautical Society of Great Britain, delivering many fundamental discoveries. However, wind tunnel testing was only applied to automobiles almost one century later, after years of using computer simulations instead of real-life procedures. This delay was also caused by the fact that automotive aerodynamics differs from aircraft aerodynamics in many ways. For example, the shape of a road vehicle is much less streamlined compared to an aircraft. Then, the vehicle does not run in free air and its motion is less affected by aerodynamic forces, while operating speeds are much lower. It first started as a way to determine ways to reduce the power required to move the vehicle on roadways at a given speed. As early as the 1920s engineers began to consider automobile shape in reducing aerodynamic drag at higher speeds. By the 1950s, German and British automotive engineers were systematically analyzing the effects of automotive drag for the higher performance vehicles. By the late 1960s, scientists also became aware of the significant increase in sound levels emitted by automobiles at high speed. These effects were understood to increase the intensity of sound levels for adjacent land uses at a non-linear rate. Soon highway engineers began to design roadways to consider the speed effects of aerodynamic drag produced sound levels, and automobile manufacturers considered the same factors in vehicle design. Today, the majority of automakers have their own wind tunnel testing facilities, using it in studying and developing the aerodynamic features of any new vehicle. The main concerns of automotive aerodynamic are reducing drag, reducing wind noise, minimizing noise emission and eliminate as much as possible any instability occurring at high speeds.   General

Home > News > Coverstory
8 Aug 2010, 13:23 UTC ·
by Alina Dumitrache
A wind tunnel typically comprises a test section where a model or vehicle can be mounted and viewed whilst air is either blown or more usually sucked over it by a fan or number of fans. Data can usually be gathered from a balance on which the model or 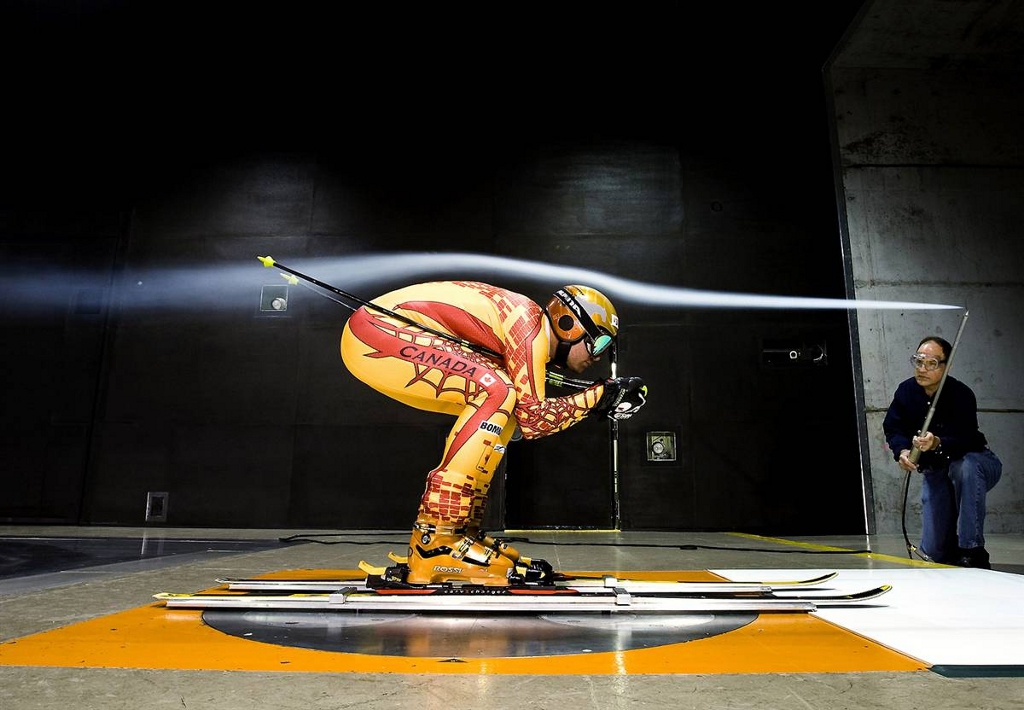 vehicle is mounted and visualization techniques such as adding smoke trails to the airflow can be used to gain an understanding of how certain geometric features affect its aerodynamic performance.

Aerodynamics expertise is frequently called upon for a diverse selection of non-automotive products. From other forms of transport such as trains and bicycles through to totally unrelated products... Lifeboats, aerials, wheely bins, tents, sports clothing and even world class skiers. Model Scale Testing 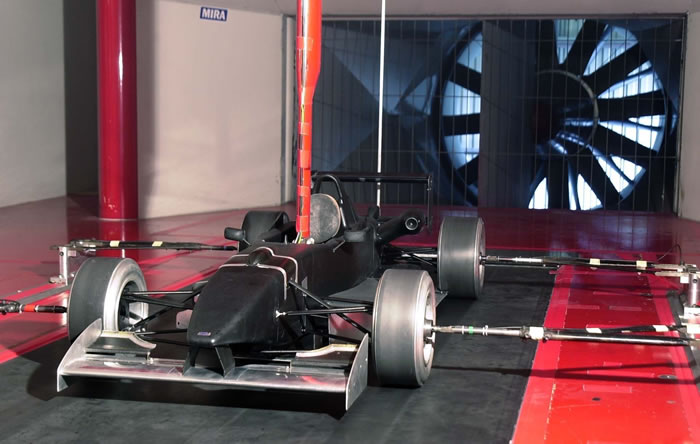 Depending on the size of the vehicle and the limitations of the test facility models typically lie between 30% - 60%. Model scale testing is ideal for rapid evaluation of the influence of different body styles and features on the vehicle's aerodynamics. By its very nature model scale testing uses smaller facilities with lower running costs than their full scale counterparts. Sophisticated test methods such as employing a moving ground plane can be done without great expense. In fact, model testing can be a cost effective method of developing a vehicle's aerodynamics. Full Scale Testing 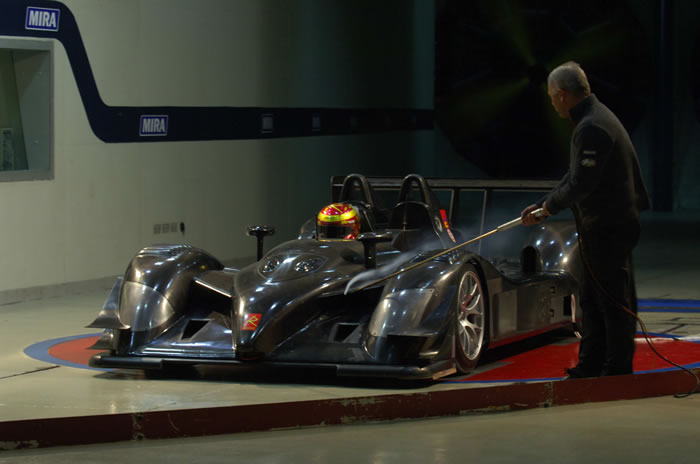 It is increasingly common to eliminate the model scale stage of an aerodynamic development program and proceed directly to full scale testing. This can be on program where a large proportion of the styling evaluations have been carried out virtually with CFD being used to predict the vehicles aerodynamic performance or on program where full scale styling models have been produced. If full scale styling models or prototypes are available then the cost of model production is avoided. 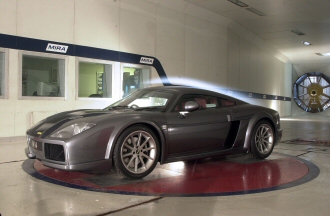 It wasn’t until 1960 that the first dedicated automotive wind tunnel was inaugurated by the specialists at MIRA, opening its doors for vehicle aerodynamics research. Since then, MIRA's aerodynamicists have been investigating the use of computers to predict the aerodynamic performance of different vehicle shapes initially with in-house developed empirically based codes.

As the power of computers and software increased MIRA's engineers have been able to use Computational Fluid Dynamics (CFD) to evaluate vehicle design and styling before physical models or prototypes are available.The Largest 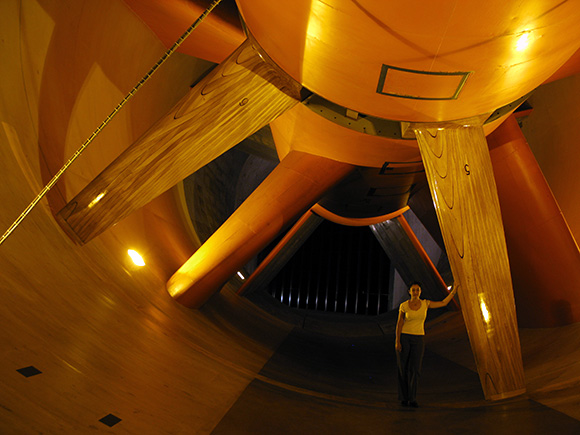 Put into operation in 1980, the GM Aerodynamic Laboratory is the largest wind tunnel in the world dedicated to automotive use (the only bigger tunnels are used by the aerospace industry). This wind tunnel features a 4,500 hp fan that can create winds up to 138 miles per hour. The GMAL, located in Warren (Michigan), consists of f six laminated spruce wood blades. The 43-foot diameter fan is powered by an extremely powerful electric motor capable of producing hurricane-force winds to aid in the development of future vehicle designs.

GM specialists say the aerodynamic work typically begins in 1/3-scale clay models to test the overall shape of a vehicle, going through a series of stages until moving to full-scale development, often testing aerodynamic changes as small as one millimeter.The Most Advanced 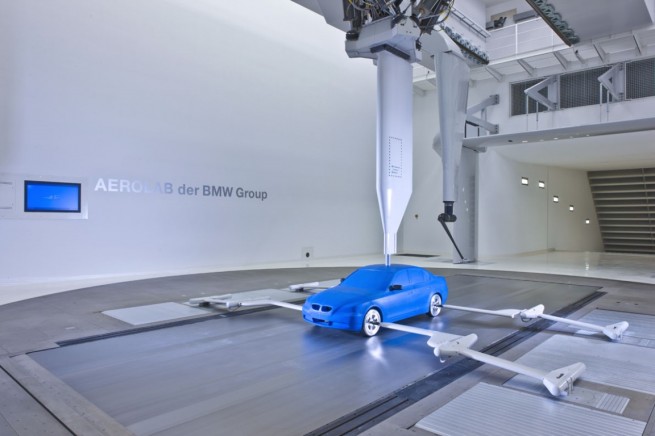 Anticipating the upcoming trend, BMW did not spare investment money when it committed itself to the development of high efficiency vehicles, and built the Aerodynamic Test Centre (ATC). This is an ultra-modern 5-story building where specialists dedicated to all aspect of car design, engineering and aerodynamics use a sophisticated equipment to perform the tests.

There are two wind tunnels, both with a running belt simulating the road related speed as well as the air speed. The largest one, designed for full-scale model and actual car (as well as other sort of vehicles or test) can test aerodynamic behaviors at speeds up to 300 km/h. The second one, called Aerolab because it is dedicated to advanced aerodynamic research rather than just tests, is large enough to allow test of full size models and cars but is specially equipped for scale models. With the air velocity reaching 140 km/h they simulate condition of vehicles driving up to 280 km/h with 1:2 scale models.