2 Thy Name Shall Be Mercedes

3 Hans Nibel: One of the Catalysts That Made Mercedes-Benz What It Is Today

4 Béla Barényi And His Tribute to Mercedes-Benz Safety

Home > News > Car Profile
Mihnea Radu
We've already shown you a couple of cool debuts from this year's edition of the Concorso d’Eleganza Villa d’Este, but this one slipped through the cracks. It's a full name is Austro Daimler Bergmeister ADR 630 Shooting Grand, and we found it easy to fall in love with it.
4 photos

As its name suggests, Austro Daimler was an Austrian carmaker, belonging to the Daimler Motoren Gesellschaft (DMG). It operated between 1899 and 1934, and even though not many people know about it, there's a revival planned.

The new shop is called Projekt Austro Daimler and seems to have some backing from Mercedes. The iconic gullwing doors of the SLS AMG were donated, but you shouldn't mistake this for a re-bodied SLS.

Instead, the Bergmeister ADR 630 Shooting Grand rides on a bespoke aluminum chassis with custom bodywork that measures 4,544mm long, 2,087mm wide and 1,331mm high, riding on a 2,637mm wheelbase. The windshield came from the AMG GT, while the internal combustion engine is an inline-6 turbo, shared with stuff like the AMG GT 43 base 4-door model.

Green cars are cool right now, and the Bergmeister is also a PHEV with a 55 kWh offering it a supposed EV range of 250 kilometers (155 miles). Combine that with a full tank and you get anywhere within 750 km (466 miles).

Styling is gorgeous from the front and average at the back. We have no pricing or availability information, but this is obviously a car for the super-rich and/or famous. 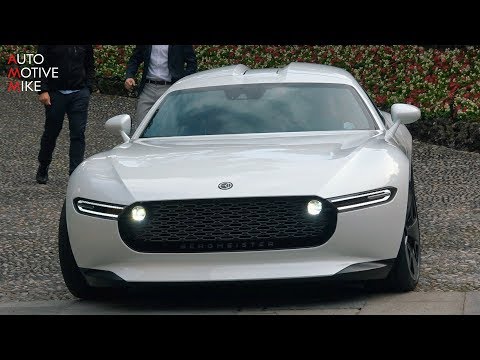