Home > News > Space Junk
Daniel Patrascu
Back in 2012, during something called FLame Extinguishment Experiment (FLEX), astronauts on the International Space Station (ISS) discovered something that can only be described as cool flames. That would be flames that burn at low temperatures – up to 400 °C (752 °F), instead of the 1,200 °C (2,192 °F) one gets from say a propane blowtorch. And now they’ve done it again.
11 photos

Earlier this month, NASA announced the results of a test that recently concluded. Called the Cool Flames Investigation with Gases (CFI-G), it sought to create cool flames using gaseous fuels instead of liquid fuel, like it happened back in 2012.

Now, conducting such an experiment here on Earth would have been impossible, as gravity prevents the creation of cool flames. In space, however, that’s a different story, and the scientists behind the test say they are pleased with the results.

Now, these guys say “this was the first time spherical non-premixed cool flames have been observed burning gaseous fuels.” And by “observed,” they don’t necessarily mean “see,” because “since cool flames give off little heat or light, they were too faint to be visible in real-time during space station testing.”

That means the scientists deduced the presence of cool flames “in the data on thermal radiation and burner temperature measurements after the hot flames were quenched.” The video (attached below) and photo taken with “an intensified camera filtered to look for the very faint emissions of a cool flame during a run of the CFI-G experiment show the hot flame going out and a cool flame appearing.”

What good is this discovery to us, here on Earth? Well, NASA says once we get a better understanding of a cool flame’s chemistry, we could end up developing cleaner and more efficient internal combustion engines for the cars we use in our daily lives. 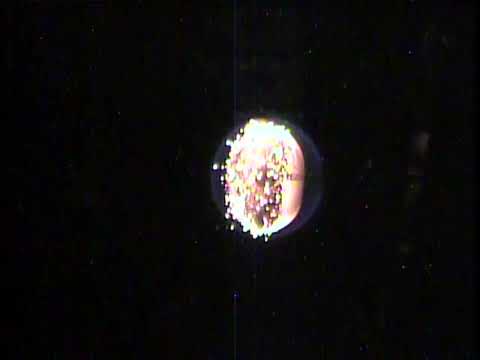