Vlad Mitrache
Much like everyone who's driven BMW's sporty hybrid, we instantly loved the i8. It is a car that looks like it has at least six cylinders under the hood and drives like it has eight, while in reality only three of them are pumping manically to provide the thrust.
1 photo
It's easy to forget you only have a tiny 1.5-liter turbo engine hidden away in one corner of the car once you get behind the wheel, and that's because the electric motor is discretion impersonated. Together, they give the i8 more than decent performance figures: 362 hp, 420 lb-ft (569 Nm), and 0-62 mph (0-100 km/h) in 4.4 seconds.

Of course, those numbers tell just half the story. Or, rather, a third. There are two more impressive things about BMW's hybrid sports car, and those are its nimbleness (despite weighing 3,439 lbs - 1,560 kg - the chassis is perfectly balanced to give an agile feel) and its ridiculous fuel efficiency.

The latter is partly achieved thanks to special, low friction and narrow tires that somehow limit the car's dynamic abilities. If you're the least serious about taking the i8 to a track day, those are the first things that need changing.

It's probably also where AC Schnitzer, an old-time BMW tuner, started with its rather discreet modifications. They replaced the wheels and rubber with 245 section front tires and 285 section rears, making sure none of the power would be wasted through wheel spin, and the car was even more stable in the bends.

Other modifications include lowering the suspension by 25 mm in the front and 20 mm at the back and installing various carbon fiber body parts to help improve airflow and downforce (front splitter, side skirts, rear air diffuser, rear spoiler).

With the red and black paint job and the added aero elements, the i8 looks ready for business. The only thing the team needed now was a professional driver, and they got him in TCR International-pro Markus Oestreich. However, watching the onboard footage of the lap below, you can't help feel that Markus is partly to blame for the terrible 8:19.8 lap time registered by the vehicle.

That's .8 seconds slower than a Porsche Cayenne GTS mark II. It's slower than a SEAT Leon 280 Cupra, a Subaru WRX STI or a Renault Megane RS. Those are all fast cars, but they shouldn't really be quicker than the i8 on track. Hopefully, somebody at BMW sees this and decides to set the record straight by doing another run. 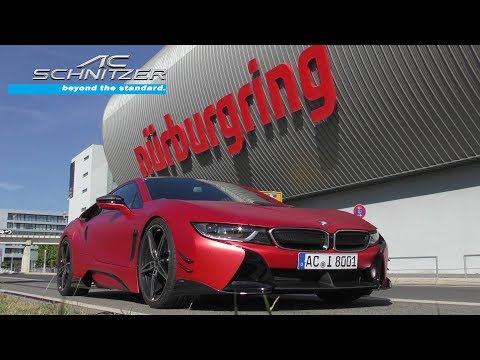