A Tuning Box Does Wonders for This Mercedes E400 CDI, There's Still Room To Improve

Twenty years ago, Mercedes-Benz launched the third generation of the E-Class, which had the W211 chassis code. It was offered with a broad range of engines, from a diesel with 120 horsepower to a 6.2-liter V8 that delivered 508 horsepower.
6 photos

It was only available for two years, and the OM628 unit was the most expensive diesel in the E-Class range at the time. It got replaced by the OM629, which was manufactured up until 2010, and had 314 horsepower on tap, along with a massive 538 lb.-ft. (730 Nm) of torque.

With diesel engines approaching the end of their careers in Europe, and not just in Europe, it is clear we are not going to see any other sedan offered with such an engine. With that in mind, one cannot help but wonder how fast these models were.

Fortunately for us, the folks at TopSpeedGermany, a YouTube channel, focuses on just that. Someone offered them an E400 CDI with just 115,414 kilometers (ca. 71,714 km) on the clock, which is relatively low mileage for a vehicle with a diesel engine and over a decade since it left the factory.

While the vehicle has a fair share of electrical issues, from what we can observe from the footage obtained by the GoPro fitted above the steering wheel, the diesel V8 can still pull like on day one.

This time, the unnamed road tester behind the channel got to try a tuning box, which claimed to bump this unit's horsepower up to 300 horsepower, while peak torque was reportedly raised to 630 Nm (464 lb.-ft.).

Although a custom map made on the dyno can provide an even better result for any engine, the plug-in power boxes have a massive advantage in the fact that they can be removed in minutes. Moreover, the newer ones can be controlled by the user's smartphone, which means the ability to switch between several settings.

While nobody can guarantee that fitting one of these to your vehicle is the best thing that you can do to it, on this E400 CDI, it seems to do the trick, as you can observe in the video.

Using the Dragy app, the vehicle's sprint from 100 to 200 kph (62 to 124 mph) was improved by 3.1 seconds, from 19 to 15.9 seconds. As you will observe, the power bump can also do wonders for its top speed. Unfortunately, it can only be enjoyed on a few unrestricted sections of the German autobahn. 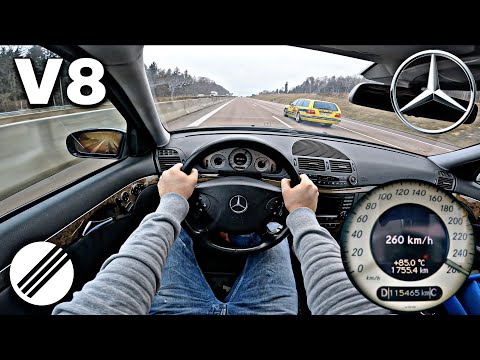