2 Russian Rocket Progress Blasts Off to the Space Station, Watch It Take Off

3 Be a Part of History, Help NASA Design the Lunar Loo for the Next Mission

A joke said that NASA invested one million dollars in creating a pen that could work into space, while the Russians just used a pencil. But the things were different. Way different.

A Man Invented a Ballpoint Pen to Write Upside Down, NASA Took It to Space

The truth is that American astronauts have been using Space Pens since 1968, and the reason they didn’t use a pencil is above folklore. Paul Fisher from the Fisher Pen Company was already trying to create a pencil to work upside down or horizontally, to be used outdoors, not only on the desks. And no, taxpayers didn’t pay a cent for that pen. Even the Russians admit that, in the video attached to this article.

On the other hand, a pencil was considered too dangerous since the graphite spills or broken tips could float away, creating a hazard to astronauts and sensitive electronics on the spacecraft. Also, worth mentioning that the graphite is highly flammable, especially in the pure-oxygen-filled cabin of the American spacecraft.

Paul Fisher was already working on a unique system, with a sealed cartridge and a piston on the upper side pushed down by compressed nitrogen. But the pressure made the ink leak, so he needed something to make it thicker. Thus, he added resin to the ink and made it, as he called it, “thixotropic.” That means it was almost solid until friction was applied. When the ball at the lower side of the cartridge started to roll on paper, the friction between the thickened ink and the ball made it fluid enough so the pen could write.

NASA asked him to make the pen work for a half kilometer (0.3-mile), but Fisher exceeded the expectations. He sent samples to the Space Agency to test them, and everybody was pleasantly surprised.

NASA’s Manned Spacecraft Center, now Johnson Space Center in Houston, tested the pens extensively. The space agency found the pens worked in all positions, in extreme heat and cold, and in atmospheres ranging from pure oxygen to vacuum. And they held enough ink to draw a solid line more than three miles long – well beyond NASA’s half-kilometer (.3-mile) ink requirement.

After the first real-testing into space, Paul Fisher named them “Space Pens,” and his son recalled that “I thought it was a terrible name. I said it’s going to sound like a toy. But my father was right, as he often was.” Starting with 1969, astronauts used these pens in every mission, and dozens of them are on the International Space Station.

This year, the Space Foundation recognized the technology as an innovation developed for space that now improves life on Earth, joining around 80 other technologies in the organization’s Hall of Fame. The organization was founded in 1988 and recognizes life-changing technologies developed for NASA and transferred for regular, Earthly use. It celebrates the scientists, engineers, and innovators that made these discoveries and communicates them to the public.

There are many technologies developed for space, which took place in our lives. The scratch-resistant lenses, the cordless tools, or the GPS entered our lives thanks to the NASA program. You may also use a brand that is used on the ISS to do the laundry.

As for the Russian cosmonauts, in the beginning, they used mechanic pencils with a thick lead inside, something like those thin mechanical pencils used for graphics. But they added the Space Pens to their inventory, Sharpies, and markers as well. 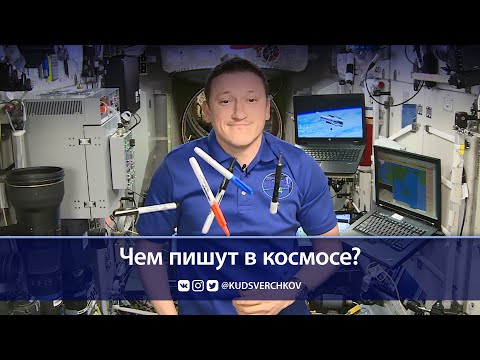