5 This e-bike is the Perfect Example of German Design and Ingenuity
Car video reviews:
Space Junk

Gravel bikes are all the rage now, as they are versatile and feature allroad capabilities. German bike manufacturer Urwahn Bikes recently announced its Acros gravel bike edition and we think you’re going to want one for yourself.
8 photos

The all-rounder was made using 3D printing and has an interesting design. It looks like it has a one-piece frame, but there are in fact several tubes used, combined with steel connectors that were 3D printed. Its cables are routed internally and it has a nickel plating coating that ensures the bike is shock and scratch-resistant.

The Acros gravel bike is supposedly light, although Urwahn doesn’t share the weight of the two-wheeler in the specs. What we do know though is that the bike is equipped with a Urwahn CT1-FS1 tapered fork, SRAM Force 22 hydraulic brakes, and SRAM Force AXS 1 X12 speed drivetrain.

Not included but optional are the Supernova E3 Pure LED lights for the front and the LightSKIN seat post with integrated rear light.

Urwahn doesn’t specify the price of the Acros gravel bike or its release date, but you can go on their website to place a request. You can order a custom bike by choosing your desired color and accessories.

Urwahn Bikes is based in Magdeburg, Germany and its journey started back in 2013 when its now CEO Sebastian Meinecke began building bikes by hand. Over the years, Urwahn has become quite popular for the 3D printing technique it uses in its bike manufacturing process.

The procedure is called Selective Laser Melting, a process that uses individual layers of steel applied to joints and fused into place with a laser, just like in the case of the Acros gravel bike or the Vagabund and Schmolke bikes, some other popular series released by the company. The result of this technique is a strong but subtle, eye-pleasing weld. 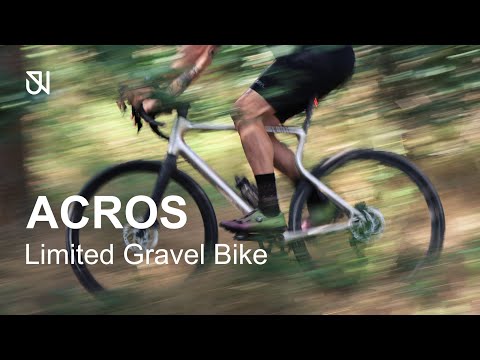