Nissan NP200 Is a Dacia Logan Pick-Up in South Africa

It's no longer a secret that everyone has very high expectations from the next generation of light-duty pickup trucks. In order to meet those expectations, the Blue Oval's 2015 model year F-150 is loaded with innovative features.
6 photos

The scope of these technological firsts includes virtually every part and sub-assembly of the truck, as well as the new F-150's manufacturing processes. Officially dubbed as the "most patented truck in Ford history", innovations bolster the next-gen pickup from head to toe - body, exterior, chassis, design, electronics and engine-wise.

Starting with the most important of firsts - the chassis and bodywork, the all-new F-150 sits on an exceptionally strong high-strength steel frame, with its body shell and cargo box made out of a military-grade aluminum alloy. The aluminum alloy undergoes a specially developed heat treatment during manufacturing, doubling the strength of the material for better dent and ding resistance.

The new platform will lower the overall weight of the pickup by up to 700 pounds, a diet which helps the F-150's towing and hauling capabilities, while offering improved acceleration times and fuel efficiency. Other innovations include the segment-exclusive LED spotlights on the side mirrors, allowing customers to illuminate the vehicle's sides for tasks such as changing a flat tire. 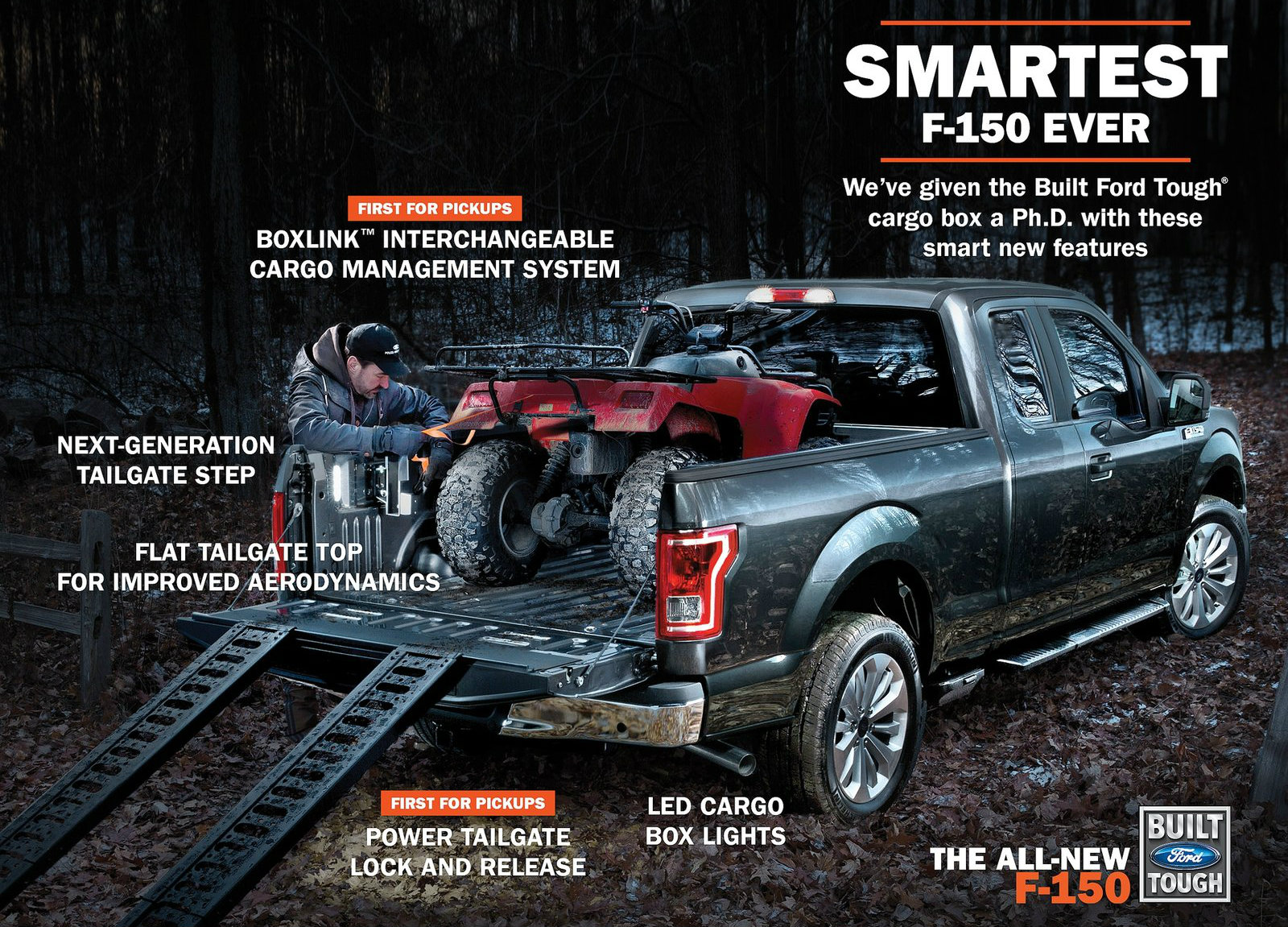 A remote tailgate is also offered. This segment-first feature automatically lowers the tailgate with the push of a button on the key fob. The tailgate step has been reengineered as well so it fully integrates into the tailgate, making it virtually invisible when not in use. Patent applications for spot welding methods, adhesives and hydroforming have also been filed by Ford engineers.

Other smart features which weren't available before on the F-150 include a 360-degree camera view, integrated loading ramps stowed in the pickup bed, a suite of 400-watt power outlets inside the cabin and the BoxLink cargo management system. The BoxLink integrates lockable, die-cast aluminum tie-down cleats for improved flexibility and cargo organization, while the integrated cargo ramps can be quickly mounted on the tailgate for easy loading of ATVs or motorbikes.

“Ford is teaching the world how to build a next-generation truck, and the more than 100 patents filed by the F-150 team for technologies on the 2015 truck further proves these Ford engineers and designers lead the automotive industry in innovation,” declared Alana Strager, Ford analyst charged with tracking new innovations for the 2015 truck.